With a fledgling economy transitioning out of almost half a century of military rule, Myanmar is the new darling among global investors. But its relationship with China, its northern neighbour, remains crucial.

China is both Myanmar's biggest investor and its biggest trading partner. More importantly, Chinese support is needed for Naypyitaw to nudge key ethnic armed groups with ties to Beijing to join peace talks later this month.

Myanmar is the linchpin in China's energy security. While China has locked horns with some Asean nations over its claims in the resource-rich South China Sea, it has invested in oil and gas pipelines that run from the western coast of Myanmar to Yunnan province, bypassing the Malacca Strait.

Some 90 per cent of future electricity produced by the US$3.6 billion (S$4.9 billion) Myitsone dam - a Sino-Myanmar venture - was designated for China's grid. The project was halted in 2011 by the previous administration under president Thein Sein due to local opposition over environmental concerns. 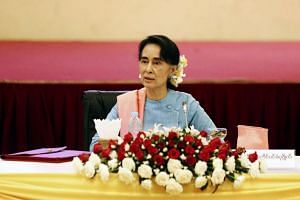 Suu Kyi and China: Who is playing whom?

Local opinion is likely to prevent a quick restart of the dam project. But Ms Suu Kyi and Chinese Premier Li Keqiang discussed the setting up of a panel to find a resolution. Negotiations have already begun to find alternatives to this dam, according to The New York Times, which cited officials close to Ms Suu Kyi.

Future bilateral concessions will be closely watched as China fleshes out a working relationship with Myanmar's civilian administration.

A version of this article appeared in the print edition of The Straits Times on August 22, 2016, with the headline 'A delicate dance with Beijing'. Subscribe
Topics:
More
Whatsapp Linkedin FB Messenger Telegram Reddit WeChat Pinterest Print Purchase Article Copy permalink