Using a technique called X-ray crystallography, the team was able to visualise the structure of an antibody binding with a protein called human leukocyte antigen (HLA) on a transplanted donor organ in a live patient. The binding stimulated an inflammatory response, indicating potential rejection.

Transplant rejection is when a patient's immune system attacks the new "foreign" organ, resulting in damage. Patients can experience both acute rejection, which happens within a year of receiving an organ, and chronic rejection, which can happen many years later.

Prof Vathsala said acute rejection - which is due to white blood cells called T cells attacking the organ - can be controlled with "excellent results" using drugs to suppress the immune system, or immunosuppressants.

She added that there were no cases of acute rejection at the centre in the last two years.

We need to move beyond that one-size-fits-all philosophy and provide precision medicine so patients can live longer with their transplants and with fewer complications.

PROFESSOR A. VATHSALA, co-director of the National University Centre for Organ Transplantation at NUH.

Chronic rejection, caused by another type of white blood cell known as B cells releasing antibodies, is harder to diagnose, predict and prevent, she said.

This is because chronic rejection is less well understood than acute rejection as the process by which antibodies bind to HLAs and cause inflammation was previously unknown.

The paper authored by Prof Vathsala, Prof MacAry and 16 other collaborators, published in the journal Nature Communications on Feb 21, is the first in the world to describe the interaction between the antibody and the HLA protein.

Between 30 per cent and 40 per cent of all transplanted kidneys are lost due to rejection over time, said Prof Vathsala. The more similar the recipient's set of HLAs are to the donor's, the less likely it is that the organ will be rejected. 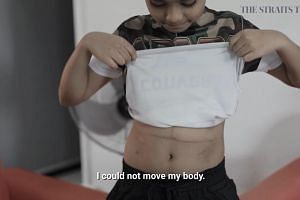 Getting a new heart and a new lease of life

It Changed My Life: A peek into dark world of organ trading

Most doctors learn that rejection has happened only after the organ graft begins to fail and a biopsy is needed. Checking for antibodies is one way to predict if rejection is likely, but not all antibodies cause inflammation, said Prof Vathsala.

The team observed that some types of antibodies can instead reduce inflammation if they bind to the HLA and prevent other types of harmful antibodies from binding.

Prof MacAry said the knowledge could be used to develop inhibitors in future that can prevent or treat chronic rejection by similarly harmful antibodies.

The team was able to define the structure of one particular type of HLA which is commonly found in Chinese populations and the most common among Singaporeans.

Over the next three to five years, the researchers aim to map the structures of all the other common HLA types in Asian populations. The methodology can be made standard for all other populations.

Understanding which specific antibodies are harmful or harmless will also allow doctors to prescribe immunosuppressants in a more targeted manner, said Prof Vathsala.

Under the current approach, most patients who receive an organ transplant take powerful immunosuppressants for their entire life to minimise the likelihood of rejection, even if they might not need it. But this also predisposes them to other infections and cancers.

"We need to move beyond that one-size-fits-all philosophy and provide precision medicine so patients can live longer with their transplants and with fewer complications," said Prof Vathsala.

A version of this article appeared in the print edition of The Straits Times on April 06, 2019, with the headline 'A chance at better life after organ transplant'. Subscribe
Topics:
More
Whatsapp Linkedin FB Messenger Telegram Reddit WeChat Pinterest Print Purchase Article Copy permalink