The rate of offenders who completed their probation orders remained high last year despite increasing numbers of longer sentences being handed out.

Initiatives spearheaded by the authorities that involve working closely with public agencies, community partners and families are being credited with helping achieve the high completion rate.

Data out yesterday showed that 84 per cent completed their probation - a tad higher than the 83 per cent in 2017.

This comes even as longer probations are being imposed.

Last year, 55 per cent of orders were for more than 18 months, an increase over the 51.9 per cent in 2017, according to the annual report from the Ministry of Social and Family Development's (MSF) Probation and Community Rehabilitation Service (PCRS).

The PCRS considers an offender's risk and needs, the number of offences, their severity and the person's role in the crime, when recommending the duration of probation.

Theft and related crimes remain the most common offences for those put on probation last year, with 33 per cent of probationers charged, an increase from the 27 per cent in 2017. 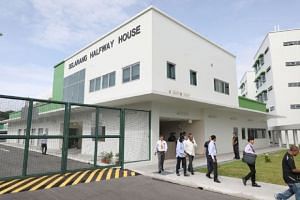 Ex-offenders to get more help to reintegrate in society

From shackles to jail cell: A convict's journey from court lock-up to Changi Prison Complex

Voluntarily causing hurt was the second-most common, followed by drug and related offences.

The report said 11 per cent of those placed on probation last year had narcotics-related offences, compared with 8 per cent in 2017.

There were 425 new probation orders issued last year, down from 451 the year before.

This number has been on the decline over the past 10 years due to the decreasing youth population. There were 1,296 probation orders issued in 2009.

The MSF employs a range of initiatives when dealing with probationers.

It partnered the Ministry of Manpower last year to give probationers who had committed vandalism or robbery against foreign workers a chance to make amends by having them paint a mural to brighten up a migrant workers' dormitory and celebrate International Migrants' Day with the residents.

The MSF also implemented a new case-management approach that uses a family-focused way for rehabilitation to address the increasingly complex needs of families.

"We believe that the key to successful rehabilitation begins with the family. The support from the family is crucial for the probationer to successfully complete his or her probation," said Ms Aileen Tan, chief probation officer and the director of PCRS.