SINGAPORE - About $7 million has been disbursed by The Straits Times School Pocket Money Fund in the first nine months of this year.

This already exceeds the $6.3 million that was disbursed in the whole of last year, and the amount is expected to rise by the end of the year.

The fund provides pocket money to children from low-income families to help them through school, and benefits about 10,000 children every year.

With the help of the Ministry of Education, the fund partnered 250 mainstream schools last year and disbursed $3.7 million through them. Another $2.6 million was disbursed through nearly 70 disbursing agencies.

These figures were announced by the fund's chairman, Mr Warren Fernandez, at the fund's annual appreciation day on Friday (Oct 5), which coincided with Children's Day.

Mr Fernandez is also editor of The Straits Times and editor-in-chief of the English, Malay and Tamil Media Group of Singapore Press Holdings (SPH).

The event was held at the SPH News Centre's auditorium in Toa Payoh. Fifteen pupils from Cedar Primary School, one of the disbursing schools, put on a musical performance at the event in appreciation of the fund's support for the beneficiaries in their school. 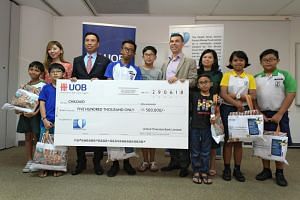 ST Pocket Money Fund for schoolchildren gets $500,000 boost from UOB

Started in 2000, the fund has disbursed almost $62 million to more than 160,000 beneficiaries. Some of the beneficiaries are from single-parent families. Others have family members who have chronic illnesses or are incarcerated.

Individuals like Mr Mohamed Abdul Jaleel, founder and chief executive of Mini Environment Service Group, also contributed to the fund. He presented Mr Fernandez with a cheque for a $500,000 donation on Friday.

A long-time supporter of the fund, Mr Jaleel has contributed about $3 million since 2010. He also heads the Shaik Mohamed Jaleel Foundation, a charity supporting single-parent families and children's education.

Mr Jaleel said: "Education is something that will never be lost. Material things can be misplaced or lost, but education stays with you your whole life."

He encouraged the fund's beneficiaries to contribute back to the community in the future.

"Even if it is a small amount, do not forget," he said.

In his speech at the event, Mr Fernandez thanked the donors and sponsors for giving generously to the fund.

He said: "It is never easy to raise funds to meet all the needs, but we will continue to try our best, reach out to new partners, and work closely with our disbursing agencies and schools so we can continue to do what we set out to do."