For eight years, marine wildlife photographer Michael Aw has been heading to South Africa annually for the sardine run between June and July when large shoals of the fish migrate along the eastern coast of South Africa.

In that time, he had taken about 5,000 photographs.

And out of that large mound of pictures has emerged a long-awaited shot that has brought the Singapore-born photographer a prized award last month: the London Natural History Museum's Wildlife Photographer of the Year in the underwater category. 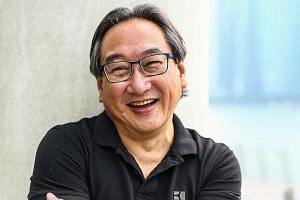 The victory is like taking home an Oscar as the award is one of the most prestigious in the world of wildlife photography.

The winning image, taken in South Africa in 2011, shows a Bryde's whale, a highly endangered creature, ripping through a swirling ball of sardines, gulping a huge mouthful in a single pass.

This has to be the greatest show underwater and people should have the chance to see it. Unfortunately, the density of sardines has not been seen since. They have been fished out. We have to stop eating fish to restore the health of our ocean.

CONSERVATION PHOTOGRAPHER MICHAEL AW, on how to save the ocean. He prefers eating chicken.

The large mammal was on a feeding frenzy.

Said Mr Aw, 59, who now lives in Australia and was in Singapore last month to talk about marine conservation as part of a series of environmental events held at the ArtScience Museum:"I am very proud and humbled to be selected from more than 40,000 entries.

"It took eight years and over 5,000 shots to be in the right place at the right time, and for the elements to come together."

Recalling the momentous event, he said the waters were a cool 19 deg C and calm on the surface. But underwater, things were hotting up.

"It was chaotic. Death for the sardines came from all sides - from the air, birds, called the gannet, swooped in to eat them. From the sides and bottom, the dolphins, and from the bottom, the whales and sharks," said Mr Aw.

There were three Bryde's whales feeding on the sardine baitball, each whale measuring about 11m in length.

He was awestruck, but there was no time to be afraid. "I felt like I was in heaven. I was grinning and my mouth was bigger than the whale after the encounter," he said.

Before his latest accolade, he had won prizes in the same competition for photographs on marine life. They were in 2000, 2006 and 2010.

"The first was for a squid in 2000 - I stopped eating squid after that. The second was for an octopus in 2006 - I stopped eating octopus. And in 2010, I won for a photograph of a school of manta rays - which I had never eaten anyway," he said with a laugh.

He reflected on his newest achievement: "This has to be the greatest show underwater and people should have the chance to see it.

"Unfortunately, the density of sardines has not been seen since. They have been fished out. We have to stop eating fish to restore the health of our ocean,''said Mr Aw, who prefers to eat chicken.