SINGAPORE - After getting a call from his elder brother who had spotted in their neighbourhood a motorcycle that, according to a Facebook post, had been stolen, Mr Muhammad Afiq Kamal was determined to track down the culprit.

When he saw the suspect riding away, Mr Afiq, 22, gave chase.

He said: "I personally like bikes. If I were to lose my own bike, I would be very worried, so I was really thinking about the other party and imagining how he would feel.

"I decided that no matter what happened, he had to get his property back, that was the most important thing."

After a 10-minute chase, Mr Afiq, a trainee at Singapore Police Force's (SPF) Training Command, was able to locate the suspect at a nearby carpark two blocks down Pasir Ris Street 21 on July 2.

"I was worried because after I gave chase, I saw that there were two people with him and I was afraid that they would beat me up," he added.

Despite the danger, he swiftly alerted the police and the suspect was arrested within 10 minutes.

Mr Afiq was among five people who received the Public Spiritedness Award from the SPF given out to members of the public who help stop acts of crime.

They received their plaques in a ceremony held at the Ang Mo Kio Police Division on Monday (Aug 5).

Another recipient of the award was sales manager Lim Tsian Aun, 40, who assisted the police in arresting a suspicious man loitering around the corridor of his Housing Board flat in Buangkok on March 31.

When he saw that the man had opened the doors of the water and electric risers, and made a mess, he immediately alerted the police.

He also assisted in pinning the suspect down after the man became violent while being arrested by the police. 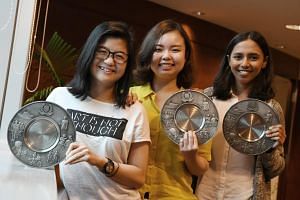 Women who chased down and cornered pervert honoured by police

The suspect was subsequently arrested for drug-related offences.

Mr Lim said: "If something is not right, you have to step in to make things right."

Assistant Commissioner of Police Zhang Weihan, commander of Ang Mo Kio Police Division, said: "SPF's vision is to make Singapore the safest country in the world, and the people we serve have also stepped up to share this common goal with us.

"These friends of SPF have demonstrated that you can fight crime in your daily life. Together, we can build a safer and more secure home for all of us."