It is the first house brand formula milk in Singapore.

Sourced from Australia, it is available in three variants, costing between $27 and $29 for a 900g tin.

The Straits Times reported in March that the average price of a 900g tin of infant milk powder in Singapore had soared 120 per cent over the last decade to $56.06, making it among the most expensive in the world.

The Government has since set up a task force to look into tightening regulations on labelling and advertising, facilitating imports of more formula milk options, strengthening public education, and encouraging good practices in hospitals.

Mr Seah Kian Peng, chief executive of FairPrice, said of the house brand it launched: "In terms of quality, it is very comparable to all the top brands. But at the same time, because of who we are, we want to make it very affordable."

An estimated 95 per cent of formula milk sales in 2015 comprised sales of "premium" and speciality milk. The authorities have advised parents against using price as a proxy for quality. 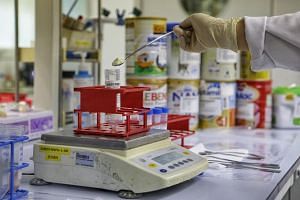 Yesterday's launch follows three recent entrants, whose prices range from $25.50 for a 900g tin of Nature One Dairy at Sheng Siong, to made-in-Singapore Einmilk at under $40 for an 800g tin.

Australia's Own, which was launched in June by FairPrice, has seen a 25 per cent increase in sales.

Senior Minister of State for Health Amy Khor, who is a member of the task force, said she was glad to see retailers being supportive.

In a Facebook post yesterday, Senior Minister of State for National Development and Trade and Industry Koh Poh Koon, who chairs the task force, said it has been "engaging retailers and companies to provide more affordable formula milk options for consumers".

One outcome of this is that formula milk manufacturer Abbott has reduced prices by packing formula in cardboard boxes instead of tins. Instead of $45 for an 850g tin, Similac Gain Stage 3 will cost $95.60 for a 2.4kg value deal.

Dr Koh said there will be legislative amendments to tighten labelling regulations, and a review of the Code of Ethics of the Sale of Infant Food Ethics Committee, Singapore.

Ms Zhao Lihong, 35, an engineer who has a 15-month-old son and is pregnant with her second child, said she was happy to see more variety. "My son drinks every brand so I choose based on discounts and the ingredients in the... milk," she said.