SINGAPORE - A total of 41 charities received the Charity Transparency Awards for exemplary disclosure and transparency practices on Wednesday night (Nov 15), six charities more than last year when the awards were introduced.

But Mr Gerard Ee, chairman of the Charity Council, which gives out the awards to promote greater transparency in the charity sector, noted that the 41 groups make up the minority of all the charities assessed for the awards.

Without revealing the total number of charities assessed, he told The Straits Times: "While we wish for a higher number to make the grade, we have set the bar very high in the first place. That the majority of charities are not on this list is not cause for alarm and it doesn't mean they are hiding things. It means that they need to improve their disclosure, so that donors have greater confidence in supporting them."

Mr Ee added that many have run their charities well, but lag behind in making their practices known due to a lack of resources, among other reasons.

This year's winners include small charities like Help Family Service Centre, Nature Society and Muscular Dystrophy Association (Singapore). The medium-sized charities that were honoured include the Kidney Dialysis Foundation, Singapore Swimming Association and Singapore Repertory Theatre, while winners among the large charities include Assisi Hospice, Association of Muslim Professionals and the Singapore Children's Society.

All registered charities - from social service to sports to religious groups - are automatically assessed once they meet the award's eligibility criteria. The criteria include the charities having operated for at least three years and having a gross annual income of not less than $50,000 in the preceding financial year. 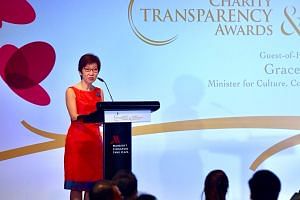 New code to ensure legitimacy of fund-raisers on crowdfunding sites

There were 2,247 registered charities in 2016 but it is not known how many met the eligibility criteria to be assessed.

The charities are judged on nine areas of disclosure, such as financial management and internal control, conduct of fundraising activities and management of conflict of interest. The assessors look at information the charities disclose on their websites, annual reports and financial statements, among other things, to determine their extent of public disclosure.

Those in the charity sector note that small charities with a small staff or those which rely heavily on volunteers may not have the manpower to compile the details of their operations and processes and to disclose them.