Radio presenter Susan Ng was about 15 years into her job when she saw a sight she would never forget - a room full of Singapore Armed Forces (SAF) men in tears.

It was in the 1990s and she was a volunteer emcee at a Community Chest event. A group of girls from Marymount Centre, a home for girls whose parents are unable to provide care for them, were performing a heartwarming drama.

"I cried while I was on stage after they had performed and I turned away (to regain composure). When I turned around, half the audience was crying and they were mostly men from the SAF. I remember this till today," recalled Ms Ng, 62.

Moments like these, she said, confirmed that her volunteer work, which she started doing in 1985, was "worth continuing".

Her contributions were recognised yesterday as she received the Enabler Award from Mr Desmond Lee, Minister for Social and Family Development and patron of the National Council of Social Service (NCSS), at the Istana during the Community Chest Awards 2018.

President Halimah Yacob was guest of honour at the event, where 246 awards were given out to top donors who helped the Community Chest (ComChest) raise a total of $57.2 million in the last financial year.

The Enabler Award is given to organisations or individuals who have made significant non-monetary contributions through their talent or capabilities, and is one of three new categories this year. The other two are the Charity Award and Volunteer Partner Award. 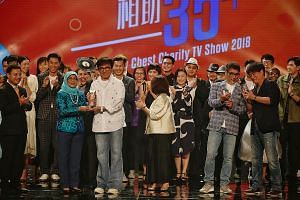 Said Ms Ng: "I was given the gift of the gab and I'm glad I can use it for good. Hopefully, this will inspire others. I believe everyone has a talent they can put to good use."

The new awards were meant to "encourage more holistic giving as the needs of our society evolve", Community Chest chairman Phillip Tan told The Straits Times.

He said: "Giving can come in different forms and ways. We hope to inspire everyone to do their bit towards building a more caring and inclusive society."

SP Group was one of the recipients of the Volunteer Partner Award, given to recognise its volunteer projects piloted with NCSS and Touch Community Services last year, such as befriending the elderly through morning exercise and serving them breakfast.

He added: "This award will greatly encourage our employees, who have been very passionate about contributing their time, talent and energy in serving the community."

Singapore Airlines was one recipient of the Charity Award, while the Ministry of Manpower received the Pinnacle Award - the highest accolade given to organisations or individuals who have supported the ComChest.

The Community Chest is in its 35th year and supports about 80 social service organisations.