Plans to enact legislation to protect patients' data, its use in electronic record system: MOH

Although most Singaporeans believe that a national electronic health record system could improve medical care, many still have reservations about who has access to their data, a survey has found.

Most of the 2,100 participants also believed at least somewhat that their records were secure, although experts said these sentiments may have changed since the SingHealth hack.

The survey was carried out between March and April this year, four months after the Ministry of Health (MOH) announced plans to have all healthcare providers upload data to the National Electronic Health Record (NEHR) system.

These plans have been put on hold since July, when 1.5 million SingHealth patients had their personal data stolen in a cyber attack.

The survey was conducted by the Academy of Medicine, the College of Family Physicians and the Singapore Medical Association.

Only three in 10 respondents had no reservations at all about storing their records in the NEHR.

Five in 10 said they were in favour of the scheme, but did not want healthcare providers to have access to their data without explicit consent, except during emergencies.

In addition, most people had no issues with uploading general medical information, but baulked when it came to more sensitive data.

The majority also said they would be at least "somewhat concerned" if MOH used their medical information for "matters of public interest" without their consent.

MOH said the survey findings reiterate concerns similar to those raised during earlier public consultations. It added that it plans to enact legislation to protect patients' healthcare data and its use in the NEHR. 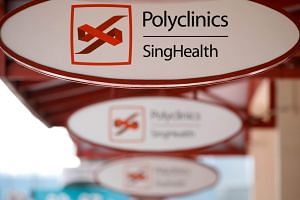 Internet surfing separation may be permanent in some parts of public healthcare, says Gan Kim Yong

In a joint response, spokesmen representing the three institutions conducting the survey said "the most important stakeholder is still the patient". They added that some information, such as vaccination records and drug allergies, is almost always non-sensitive - but everything else could differ from patient to patient.

"What is sensitive to one patient may not be sensitive to another, so it is better to let the patient himself decide," they said.

Dr Goh Tze Chien, who practises at a Northeast Medical Group clinic in Simei, said a middle-ground solution could be to lock up information such as detailed psychiatric or sexual history. At the same time, doctors could have access to "a simple summary of all major diagnoses, outstanding problems and current medications", with further access granted if patients agree to it.

At least seven in 10 surveyed said they were at least "somewhat confident" that their NEHR data would be secure and not be misused.

Dr Loke Wai Chiong, who is healthcare sector leader for Deloitte South-east Asia, pointed out that the issue of cyber security is one that every industry will have to grapple with.

He said: "Besides the continual strengthening of cyber-security measures to build customer confidence, the more important long-term determinant will be whether the benefits of NEHR outweigh the risks for the ordinary person on the street."