SINGAPORE - Three people, aged 23, were arrested in relation to a brawl at a club along Sentosa Gateway.

The footage of the fight at Envy Dance Club went viral on Tuesday (Nov 14). In the clip, chaos breaks out at the club, with people punching and kicking one another and throwing items around.

The brawl occurred around 4.30am on Sunday, the police told The Straits Times.

An officer from Clementi Police Division was conducting routine patrols along Sentosa Gateway when he tried to stop a dispute.

Instead, he was assaulted by two 23-year-old men. A 23-year-old woman also grabbed the officer and punched him.

The trio were subsequently arrested for voluntarily causing hurt against a public servant.

The club posted a note on Facebook on Tuesday morning, saying it is conducting investigations along with the police. 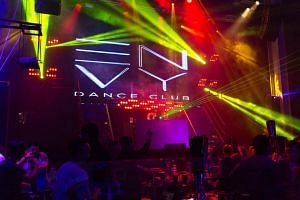 "We strictly do not condone such rowdy actions and will protect public interests at all costs," it said. "We apologise for any dismay caused during the enforcement for safety and protection."

The club, which is at St James Power Station near VivoCity, added that "various perpetrators have already been taken down", and called for those with information to contact them.

When contacted by ST, the club said it will comment only after discussion with the police.

It is unclear whether anyone was injured in the brawl.

The Singapore Civil Defence Force said it was not alerted to the incident.