The number of young children with developmental problems enrolled in a government-subsidised therapy programme has almost doubled in the last five years, and more places will be added later this year.

The Ministry of Social and Family Development said 2,600 children benefited from the Early Intervention Programme for Infants and Children (Eipic) last year, compared to 1,400 children in the programme in 2010.

The number of centres offering the programme has also increased from 11 in 2010 to 17 last year. The ministry spokesman said three new Eipic centres, offering an additional 400 places, will open later this year to cater to projected demand for the service. 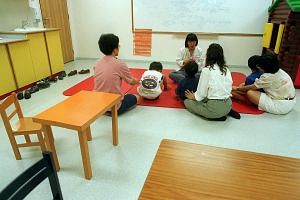 The SPD, a charity helping people with disabilities, now has 200 children enrolled in its Eipic centres in Tiong Bahru and Jurong. It will open two more in Bedok and Tampines later this year.

Awwa, another charity, is setting up a new Eipic centre in Hougang in July and plans two more next year. It now runs two centres with 230 children. When its new centres are up, it will be able to cater to about 500 additional children.

With more children diagnosed with developmental problems, the demand for a place in the Eipic programme has shot up. The average waiting time for a place is now six months, the ministry said.

The programmes cater to children under the age of seven with moderate to severe developmental problems, and aim to help them overcome their problem or at least prevent it from deteriorating.

Housewife Marie Wong, 36, said her son Darius, four, improved markedly after attending the programme at SPD over the past two years. He is suspected to be suffering from global developmental delay, which means he lags behind his peers in two or more areas of development, such as in language and motor skills.

At Eipic, he is taught life skills, such as how to eat and go to the toilet by himself. He is also helped to develop his language and speech, among other therapies. "Darius is more communicative now and he can sit and follow instructions, unlike before," Mrs Wong said.

All Singaporean children get a base monthly subsidy of $500 for the Eipic programme, and a base subsidy of $300 a month for the Development Support Programme (DSP). Families qualify for further subsidies, depending on their per capita income.

The DSP, which helps children with mild developmental needs overcome their conditions and improve in areas such as in their language, literacy and social skills, was rolled out by the ministry in 2012. Some 1,200 children were on the programme last year. It is offered in 300 pre-schools, and some 30 more will offer the programme this year.

Part-time stall assistant Junizawati Iskah, 33, said her son, Hazrel, six, was slow in understanding the English language and often got the letters mixed up. But after going through the DSP at My First Skool, he "can now read a storybook. He has caught up and made big improvements".