SINGAPORE - Officers from the Immigration and Checkpoints Authority (ICA) arrested 22 people from Monday (Aug 5) to Wednesday at various locations for immigration-related offences.

The suspects were arrested for offences such as overstaying, and harbouring and employing immigration offenders.

"Some of these immigration offenders were found engaging in work related to construction, cleaning as well as food and beverage industries. Investigations are ongoing," the ICA said in a statement on Thursday.

Thirteen men and nine women, aged between 23 and 69 years old, were arrested.

The suspects were arrested in residential and commercial premises in locations such as Kallang, Geylang, Orchard, Mandai, Little India and Serangoon, ICA said.

Overstaying or illegal entry carries a jail term of up to six months and at least three strokes of the cane. People who depart from the country illegally can be fined up to $2,000, jailed up to six months, or both.

ICA said: "Those who wish to rent their premises must exercise due diligence in checking the status of their prospective foreign tenants to ensure that their status in Singapore is legal."

Three mandatory checks should be conducted by landlords:

- Verify the validity of his/her pass by checking with the issuing authority (i.e. the Ministry of Manpower for work passes and ICA for other immigration passes such as Student's Pass and Long-Term Visit Pass). 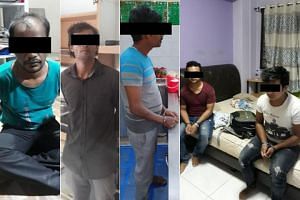 If anyone is found guilty of recklessly (that is, carrying out only one of the three due diligence checks) or knowingly harbouring overstayers and/or illegal immigrants, he may be jailed for at least six months and up to two years, and fined up to $6,000.

If anyone is found guilty of negligently  (that is, carrying out only two of the three due diligence checks) harbouring overstayers and/or illegal immigrants, he may be fined up to $6,000, jailed up to 12 months, or both.

Anyone found guilty of employing an immigration offender can be jailed for at least six months and up to two years, and fined up to $6,000.