SINGAPORE - When Mr Muzammil Mohamad first organised a charity bake sale for his friend's company, he had thought it would be a one-off project.

But the positive response to the sale has led to the formation of a social initiative that is now raising funds to feed needy families during Ramadan.

For his first charity bake sale last year, Mr Muzammil had gathered friends and individual food and beverage players as vendors to sell halal pastries to raise funds for charity.

When the bake sale received great response, the 32-year-old civil servant was approached by an acquaintance, Ms Saleha Abdullah, 29, a warehouse coordinator, to form a social initiative.

The two started Halal Goods Do Good last year and have organised five food sales to raise funds for different charities, including some which have difficulties raising funds due to their size or lack of experience.

These events have often required them to use money from their own pockets and can cost up to $2,000 per sale.

Mr Muzammil, who goes by the name Jamil, said: "We are a completely non-profit initiative, but we are also not a registered charity. We act as middlemen between charities and the public and help them raise funds."

Now, the two are embarking on their first pledge event in the spirit of Ramadan.

They have partnered local social enterprise GobblerShop to raise funds to provide bags of groceries to needy families. GobblerShop sells groceries at discounted prices and helps the socially disadvantaged to find employment.

The bags of groceries will go to the beneficiaries of four charities - Free Food For All, Project Goodwill Aid, Hira Society, and For The People & Community.

Mr Muzammil said: "We are on a timeline to coincide the giving of the bags with Ramadan but the beneficiaries are not solely Muslim. It's for everyone."

Festive seasons are peak periods for giving, with many charities organising such events.

Community Chest, the fund-raising arm of the National Council of Social Service, held its Fu Dai event over two days in February, ahead of Chinese New Year festivities. More than 2,000 corporate volunteers and community groups delivered more than 6,000 fu dai, or goodie bags, to underprivileged seniors and families. 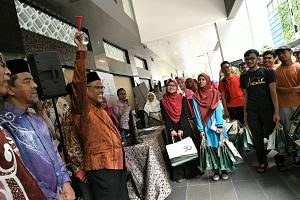 Donations have grown in the face of the economic upturn. Contributions on Giving.sg, the National Volunteer and Philanthropy Centre's online donation platform, increased more than 20 per cent in 2017 from the previous year.

Mr Muzammil hopes this generosity will translate into more donations.

The Halal Goods Do Good initiative will work off GobblerShop's e-commerce platform, where people can pledge and pay $25 for one bag of groceries, which will include all-halal products and essentials such as rice, oil, Milo drinks and soya bean milk.

The retail value of each bag is about $45 and should last a week for a family of four to five people.

Ms Cheryl Mah, marketing manager of GobblerCo, the parent company of GobblerShop, said: "If money for more than 400 bags is raised, we are ready to curate new bags of groceries."

She hopes Singaporeans can chip in. "The pledge is only $25 but the retail value of the bags is $45 each, so we are already subsidising the bags in a way."

Members of the public interested in pledging a bag can go to www.gobblershop.com for more details or visit the Halal Goods Do Good Facebook page at www.facebook.com/HalalGoodsDoGood.