A video of the incident, which went viral after it was posted online on the same day, shows the motorcycles brushing against each other before toppling. The video ends with the four officers falling to the ground.

The incident was captured on the dashboard camera of a car that was travelling behind the motorcycles at the time.

In the video, the car manages to stop in time, narrowly avoiding a collision with the bikers.

Since it was uploaded onto YouTube, the video has been viewed more than 18,200 times and shared widely on Facebook.

In response to queries, the police confirmed with The Straits Times on Monday that an accident involving two police RDT motorcycles, a car and a taxi occurred on the PIE, towards Changi Airport, at about 11am.

"We would like to thank the public for their concern. Two police officers sustained light injuries and have received outpatient treatment," they said, adding that no one else was hurt and the Traffic Police is investigating the accident.

These officers, who are from the Special Operations Command, form the second wave of responders supporting the land divisions' emergency response teams in the event of terror attacks.

Two officers ride on an 800cc dual-purpose motorcycle that can handle rough terrain and allows them to manoeuvre through traffic to reach incident sites quickly.

The black motorbike weighs around 210kg and is equipped with blinking lights, sirens, crash bars and a special latch to carry two circular riot shields.

The added weight alters a motorbike's handling traits, which is why RDT officers have to maintain a higher level of riding proficiency - on and off roads.

Each officer goes through basic and intermediate riding courses before being allowed on patrols. 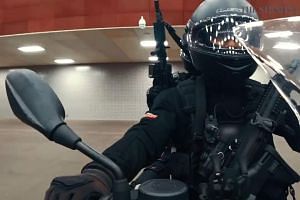 Mobile unit trained to fight terror with speed and skill

Their timed riding assessments include executing high-speed collision avoidance drills, turning in tight spaces and negotiating obstacles found in urban landscapes, such as stairs and kerbs.

The incident comes after a pair of RDT officers were filmed falling off their motorcycle while waiting at a traffic light late last month.

In the video taken on Feb 25, the officer steering the bike appears to lose his balance, before the vehicle leans to the left and lands on the road.

However, the officers were able to quickly regain their footing, lift their bike to an upright position and mount it just before the traffic light turned green.