SINGAPORE - Two more bodies have been identified as missing crew members of a dredger that collided with a tanker in Singapore territorial waters on Sept 13.

The accident, which took place at 12.40am, left two sailors dead, three missing, and seven members of the crew of 12 taken to hospital.

On Monday (Oct 23), the Maritime and Port Authority of Singapore (MPA) said in a statement that the two newly identified bodies were found on Sept 16 and 17 respectively.

The first body was found south of Raffles Lighthouse in Singapore waters on Sept 16, and family members have since claimed the body.

The second body, found 1.9 nautical miles north-west of Tanjung Sengkuang in Indonesian waters, off Batam, was found a day later. The body is in the process of being claimed by the family.

The Straits Times understands that the second body was confirmed to be a missing crew member last Friday. 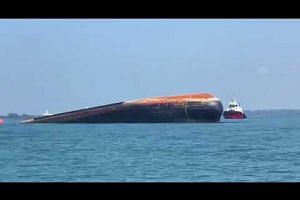 It will continue to issue safety broadcasts to ships in the area to keep a lookout for the sailor.

This was where the dredger was transiting and the tanker was leaving Singapore to join the eastbound lane.

Two bodies were recovered by divers on the same afternoon. One was that of a Chinese national and the other, a Malaysian. Both were from the JBB De Rong 19.

The 26 Indonesian crew members on board the Kartika Segara were unscathed.