Housewife Irene Soong Yeo Leng was taking her son to a concert rehearsal when she spotted a man acting suspiciously beside another man who was dead drunk and sprawled on the bench of a bus stop outside Clarke Quay MRT station.

He was fiddling with a mobile phone, in a bid to unlock it, as she approached him. She asked him what he was doing.

Dissatisfied with his answer, she fished out her mobile phone and snapped a picture of him while telling him she had witnessed his actions. Later, the 47-year-old filed an online report on the Singapore Police Force portal.

Yesterday, Madam Soong, with 10 other members of the public, received plaques from the police for their civic-mindedness that helped the men in blue nab the offenders in five cases: three involved thefts and two were upskirt crimes.

She confessed she did not think of her personal safety then.

"Looking back, I'm surprised that I was so garang (Malay for daring) because the man was intimidating, tall and mean-looking," she told The Straits Times. "But I needed to set an example for my boy. 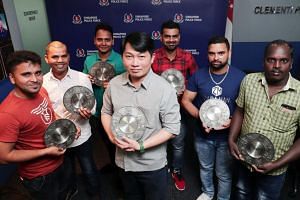 Her 12-year-son, who plays the violin, was late for the rehearsal at Victoria Concert Hall where his music school was putting up a show.

Similarly, 35-year-old Shawn Tan Chin Kwang, a business development manager, was late for work on Jan 21 this year when he detained a man taking an upskirt picture at Raffles Place MRT station.

It was morning rush hour and he saw a man with a backpack holding a phone under the dress of a woman on an escalator going up.

Instinctively, he followed the culprit and took his phone. The culprit tried to snatch it back and run away but Mr Tan gripped his backpack and with the help of passers-by, held the 29-year-old suspect until the police arrived.

Yesterday, he told The Straits Times why he did it: "I've got family, a wife and a daughter. This is not something I want them to go through as well."

Deputy Assistant Commissioner of Police Gregory Tan Siew Hin, in thanking the 11, noted that nine "even put themselves at risk of harm by stepping forward to help apprehend the culprits".

Madam Soong believes the police recognition will encourage "more people to step up" if they were to witness similar incidents.

The online police portal also played a big role in her making her police report, she said. "It was convenient and easy to access.''