SINGAPORE - A British academic and Law and Home Affairs Minister K Shanmugam had a spirited debate over whether falsehoods can be defined easily on Thursday (March 15).

Mr Ben Nimmo, a senior fellow at American think-tank Atlantic Council, argued that there are so many shades of grey that a law to tackle the problem of deliberate online falsehoods would likely have a preamble as big as the Oxford English Dictionary.

"How do you define the problem? What if it's 5 per cent true? Is it still a false story? Is it deliberate?" asked Mr Nimmo, who analyses disinformation and fake news at the think tank's Information Defense Digital Forensic Research Lab.

"I beg to differ with you in this sense that there are items which are completely manufactured and totally untrue, which are legally very easily identifiable," he said.

Their lively exchange wrapped up the second of eight-day hearings by a parliamentary committee on deliberate online falsehoods.

Mr Nimmo, who spoke from Britain via video conferencing, argued that legislation should be used only at the last resort to rein in online falsehoods.

Worker's Party MP Pritam Singh, a committee member, had first raised the issue when he asked Mr Nimmo if he was proposing legislation as a way to get social media platforms to remove false content. He was referring to Mr Nimmo's written submission to the committee, where the former journalist wrote that governments should engage with platforms, such as Facebook and Twitter, to find a way to quickly shut down networks of false information.

Mr Nimmo said this was not what he had meant. 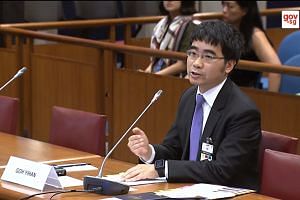 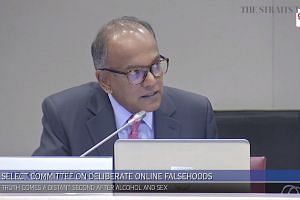 Singapore can be 'a sandbox for subversion', warns expert at hearing on deliberate online falsehoods

"No, I'm not proposing that. I'm very wary of any legislative proposal, anywhere in the world, which will allow politicians to order social platforms to change the content on their platforms. Because the precedent for countries hostile to democracy would be very, very alarming," he said.

Instead, Mr Nimmo threw up the idea of a direct hotline for the authorities to reach social media companies such as Facebook or Twitter when they notice a spread of disinformation in Singapore, to get the companies to take action.

Such a solution had worked for Mr Nimmo personally. When false news of his untimely demise spread on Twitter last August, he was able to get thousands of automated accounts shut down by Twitter by going directly to the social media company.

But this may not work for all, argued Mr Shanmugam.

"In the United States,I suppose you can talk it out. But what about other countries, when they talk to these large international platforms, what if they say no to you? To a country like Singapore? What do we do?"

Mr Shanmugam added that legislation may not be the only solution, and there might be different solutions for differentiated outcomes.

Mr Nimmo said if social media platforms did not want to cooperate, "that's when you can start thinking about legislation", and acknowledged that it is within Singapore's purview to introduce legislation should it so wish.