A system was in place to ensure that the monthly payments Aljunied-Hougang Town Council (AHTC) made to its managing agent were signed off and approved by Workers' Party (WP) chairman Sylvia Lim.

Starting off the second day of a multimillion-dollar court case involving three WP MPs and two town councillors, Mr Netto said there was no dishonesty on the part of FMSS' shareholders - Ms How Weng Fan and her husband, the late Danny Loh Chong Meng, also the town council's secretary and general manager, respectively.

The lawsuit, initiated by AHTC, under the direction of an independent panel, centres on $33.7 million in payments AHTC made from 2011 to 2015 to FMSS and service provider FM Solutions and Integrated Services (FMSI), which are alleged to be improper and void.

Ms Lim and then WP chief Low Thia Khiang have been asked to account for the money and to repay any sums paid out wrongfully.

Mr Netto, who is representing Ms How and FMSS, said allegations suggesting that AHTC paid a higher fee because it engaged new managing agent FMSS in July 2011, after winning Aljunied GRC in the May election, are "preposterous". Ms How is also representing her late husband.

Mr Netto said the previous vendor, CPG Facilities Management, outsourced the maintenance of the town council management system for close to $460,000 a year. FMSS did this without cost, he said. 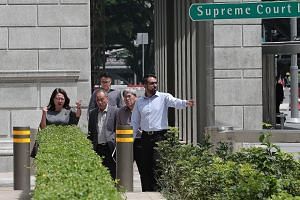 He said Mr Loh and Ms How worked "tirelessly" and performed the difficult task of upscaling the IT system used by the WP-run Hougang Town Council so it could be used for the larger Aljunied GRC.

Mr Netto said the auditors were "not in the shoes" of AHTC, and that a plain reading of the audit report suggests they were prepared by "bloodhounds", not "watchdogs". In the two lawsuits filed by AHTC and Pasir Ris-Punggol Town Council (PRPTC) against the defendants, "knives have been sharpened", with the defendants as "lambs".

Senior Counsel Davinder Singh, who is representing the PRPTC, said last Friday that the circumstances in which FMSS was appointed created a system whereby "controls were abdicated and checks and balances were thrown to the wind".