SINGAPORE – There is a need to strengthen the maritime rules-based order to provide a strong foundation for the global economy of tomorrow, said Minister for Trade and Industry Chan Chun Sing on Tuesday (May 14).

Speaking at the opening dinner of a maritime security conference, he said the existence of a maritime rules-based order shows that countries can come together to cooperate and not just to compete.

Describing the seas as a global commons that facilitate the free flow of maritime trade, Mr Chan added that “sharing is effective only if countries abide by the rules”.

He stressed that United Nations Convention on the Law of the Sea (Unclos) – the rules of the sea – ensures free and equitable usage of the maritime commons and should not be misconstrued as a division of sea territory.

“If we start to disregard international law, pursue self-interests and curtail the freedom of the seas, we threaten the very space shared by all maritime users,” said Mr Chan.

Mr Chan said that in Asia today, there are still claims by regional states that do not abide by the terms of Unclos, citing examples such as territorial baselines drawn or claimed incorrectly, delimitations of exclusive economic zones (EEZs) from uninhabitable rocks, and enforcement of EEZ for reasons other than protection of economic rights.

“Such claims go against the spirit of how Unclos was formed,” he added. 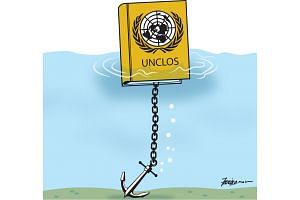 The UN Convention on the Law of the Sea: A revolutionary treaty

He described Unclos as a remarkable endeavour in striking a balance between preserving the freedom of the seas against the interests of coastal states and achieving consensus among the more than 160 nations involved.

But this was possible only because all parties understood the necessity of accepting trade-offs to achieve the greater good, he added.

“These trade-offs were made as a package – ignoring even a single one of them risks undermining the whole,” said Mr Chan.

“As signatories, our adherence to the entirety of Unclos is crucial. It signals our commitment to uphold international law and promote a rules-based order. Today’s Unclos encapsulates the many years of negotiation and trade-offs, and we cannot treat that underlying consensus lightly.”

Mr Chan was giving the keynote address at the opening dinner of the 6th International Maritime Security Conference held at the JW Marriott hotel at Beach Road, which was co-organised by the Republic of Singapore Navy and the S. Rajaratnam School of International Studies.

More than 400 participants from navies and coast guards, maritime industries, academia and think-tanks from more than 40 countries are expected to attend the conference on Wednesday.

As navies modernise and grow larger, more ships will ply waters in the region, and potential for miscalculation will increase.

Terrorism also remains a serious threat, and the effects of an attack at choke-points such as the Straits of Malacca and Singapore, Panama or Suez Canals cannot be underestimated, said the minister. 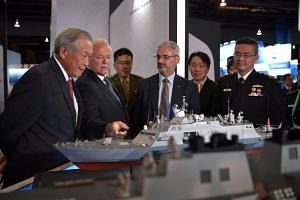 Strong consensus needed from all countries on common rules for the seas: Ng Eng Hen

Mr Chan said: “The complex nature of these challenges implores us to work closer together. A preoccupation with guarding our own interests will prevent us from mounting effective responses."

“All this starts with building trust at every level. We share the seas and there is space for us to respond as a community; to protect our global commons together, instead of just our territorial limits,” he added.

First, operational mechanisms, such as the Code for Unplanned Encounters at Sea (Cues), are needed to prevent miscalculations at sea.

Countries should also build open and inclusive platforms for dialogue, including the International Maritime Security Conference and the Shangri-La Dialogue.

Emphasising participation from the wider maritime community in such dialogues, Mr Chan said doing so will promote more holistic perspectives and better solutions.

In terms of practical cooperation, having sea exercises between navies, information-sharing arrangements, and coordinated security operations are well-established ways of promoting understanding and communications channels.

He cited upcoming exercises this year, such as the Asean-US Maritime Exercise and a trilateral exercise between the Republic of Singapore Navy, Indian Navy and Royal Thai Navy.

“These serve as building blocks to pave the way for more substantive forms of cooperation in the future,” he said.