COLOMBO • Just before the sixth round of talks for a free trade agreement (FTA) with Singapore, Sri Lanka's chief negotiator - a staunch free trade advocate - died of a heart attack.

Dr Saman Kelegama's death last June cast a cloud of uncertainty over the future of the negotiations. Would the new chief negotiator believe in the deal the way Dr Kelegama did? Would the talks face a long postponement?

Dr Kelegama was highly respected by his team, Singapore's chief negotiator Luke Goh said in an e-mail interview with The Straits Times yesterday, a day after the FTA was signed in Colombo.

Besides the strong mutual respect between the two chief negotiators, they were also "remarkably aligned in their world views on the benefits of free trade", Mr Goh said.

His anxiety, however, was swiftly assuaged by the Sri Lankans when they next met last August.

Though shocked and saddened, they "regrouped rapidly", with the deputy chief negotiator taking over and resuming talks with "hardly any delay".

Negotiators who were "normally reticent" came up to Mr Goh to say they appreciated the letters of condolence sent by Singapore's Minister for Trade and Industry (Industry) S. Iswaran and Mr Goh, and Singapore officials attending the wake.

They added that they would "redouble efforts" to find solutions to the deal as a fitting tribute to Dr Kelegama, Mr Goh recalled.

"That was the moment I thought it was possible to conclude the FTA by early 2018," he said.

The trade pact has been welcomed by Singapore businesses and observers. It guarantees zero tariffs on 80 per cent of product categories for 15 years, a move that is expected to bring $10 million in tariff savings for Singapore annually. 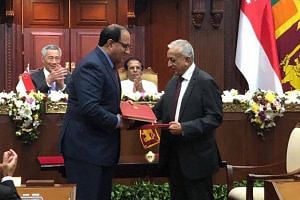 Despite anti-trade talk across the world, there is still appetite for economic integration, says Iswaran

It will also enhance investment protection and ensure Singapore companies can bid for government procurement deals.

Mr Goh, who is also deputy secretary for trade at the Ministry of Trade and Industry (MTI), led a team of 25 negotiators from nine government agencies for the talks. His core teammates were deputy chief negotiator Francis Chong and team members Kashnan Dara, Amanda Kwek and Gillian Goh.

A key factor in their success is an understanding of the other side's "underlying needs and constraints", and coming up with the terms to meet those needs, he said.

The complexity of trade procedures and market access rules "give tremendous leeway for creative solutions", he added.

Sometimes, site visits were useful. The Sri Lankans were invited to visit re-manufacturing centres in Singapore to help them understand that they churned out high-tech products and not simply used cars, said the team.

On tariffs, some Sri Lankan lobbyists felt Singapore had "nothing to give" as it had few tariffs to eliminate. This meant the team had to work harder to persuade Sri Lanka that Singapore imports and investments would benefit Sri Lanka.

Singapore also made the strategic choice of focusing on product categories "with the greatest potential to enhance bilateral trade", instead of trying to eliminate all tariffs.

But one tariff the team failed to get rid of was that for petroleum products - an important export item for Singapore.

The team told The Straits Times that petroleum was particularly sensitive for Sri Lanka because there were already certain investments being planned based on existing tariffs. Changing tariff levels would jeopardise those investments.

They decided to close the deal without petroleum, as "a perfect agreement that misses the moment could well be perfectly useless".

Back in Singapore, the team talked to firms to find out what mattered most to them.

Tariffs, local taxes, Customs procedures and clearing times can all impact a company's profits, but each company may value each benefit differently.

To better understand negotiating, Mr Goh stood on the shoulders of predecessors, relying on handbooks written by past negotiators.

He said: "There is a famous anecdote of two parties failing to reach a deal on dividing an orange because they failed to realise that one wanted it for juice, while the other desired the peel for marmalade.

"It could have been a win-win had they taken the time to understand each other better," he said - a mistake Singapore and Sri Lanka were wise to avoid.