Have faith in Singaporeans' ability to fight a cause without foreign help, Home Affairs Minister K. Shanmugam said with a smile yesterday, when a member of the House took issue with a change in the Public Order Act.

He said this would include a broad swathe of civil society events, ranging from public panel discussions involving foreign experts on animal abuse to a public lecture on health policy by a foreign expert.

He asked if the changes to the law could be made clear to ensure such events, which do not have public order or safety concerns, are free from "unnecessary scrutiny".

Otherwise, he suggested, the amendment would curtail "active citizenry" or participation in Singaporean civil society. 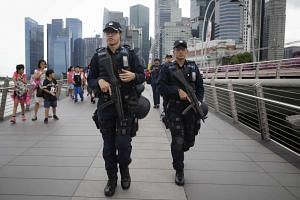 Mr Shanmugam responded with a smile: "I wonder if we are moving like ships in the dark (at) sea - the Bill says one thing and Mr Kok's speech pretty much has nothing to do with the Bill."

"Why don't we have confidence that our people can organise and take part in civic activities?"

He cited the example of Pink Dot, the annual rally held at Speakers' Corner to support the lesbian, gay, bisexual and transgender (LGBT) community.

Pink Dot organisers have reportedly already raised for the July event about 70per cent of what was collected last year. And the money came entirely from local companies.

In the past, foreign companies formed the majority of its sponsors, but last October, the Home Affairs Ministry said only local entities can sponsor, promote or get their employees to participate in events at Speakers' Corner.

Pointing out that the Government took no position on LGBT issues, Mr Shanmugam said the matter was one for "Singaporeans, Singapore companies and Singapore entities to discuss without involvement of foreign culture wars".

The amendments to the Act were not relevant to encouraging the local political discourse that Mr Kok spoke about, he added.

The Government, however, needed to ensure that foreigners did not take Singapore's public space for granted to advocate political causes.

Mr Kok and Mr Louis Ng (Nee Soon GRC) also asked whether the police commissioner would have the institutional competence to decide if an event served a "political end", and whether the police's political neutrality would be compromised in making these decisions.

Mr Shanmugam said any attempt to define whether an event was political or not would run into "shades of complexity".

"All you will end up doing is creating alleyways and byways in which your definition will be made useless and you will be made a laughing stock," he said.

To drive home his point, he described four hypothetical events and wondered aloud: Do you think we should agree to such events?

•Foreign Christian groups organising an event with locals, calling for an anti-LGBT rally

•Hindus from India financing an animal welfare event in Singapore protesting against the sale of beef here.

Said Mr Shanmugam: "Singaporeans organising protests is one thing; foreign-financed, foreign-participated protests are a completely different ball game. We have been successful by being very firm about that, let's not change the rules."

A version of this article appeared in the print edition of The Straits Times on April 04, 2017, with the headline ''S'poreans can fight a cause without foreign aid''. Subscribe
Topics:
More
Whatsapp Linkedin FB Messenger Telegram Reddit WeChat Pinterest Print Purchase Article Copy permalink