Singapore has its own principled, consistent stand on the issue of the South China Sea and cannot succumb to pressure from other countries to side with their territorial claims, Prime Minister Lee Hsien Loong said yesterday.

Singapore is "in a slightly warm seat" as it happens to be the country coordinator for Asean-China dialogue relations until August 2018, he said.

China and four Asean countries - the Philippines, Brunei, Malaysia and Vietnam - have overlapping claims in the South China Sea.

"Each party wants us to side a bit more with them... We are doing our best to be an honest broker, dealing straight with all parties," he said.

Although Singapore has no claims of its own in the South China Sea, it has a stake in the dispute, he said as he outlined three principles that matter to the country: upholding international law, maintaining freedom of navigation and promoting a united Asean.

It is of vital interest to small countries that disputes with other countries are settled peacefully through the use of international law, Mr Lee said, as he used some of Singapore's disagreements with Malaysia to illustrate his point. 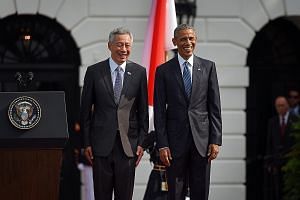 Singapore aims to be within US, China circles of friends

The issue of Pedra Branca, an island 50km off the Singapore coast, was taken to the International Court of Justice, where Singapore got a favourable result and both sides accepted the ruling, he said.

Also, the issue of whether development charges were payable on former Malayan Railway land was resolved through arbitration. This time, the ruling went against Singapore, but, again, both sides accepted the result and moved on.

"We did not let it affect our relationship with Malaysia or my personal ties with PM Najib," Mr Lee said, referring to Malaysian Prime Minister Najib Razak.

But Mr Lee noted that large powers do not always adhere to such practices as they often insist on their own interests.

When the Arbitral Tribunal at The Hague rejected China's claims in the South China Sea last month after the Philippines brought the case before it, China refused to recognise the ruling.

China is not the first country to refuse to comply with an international tribunal's ruling, but Singapore must continue to support a rules-based international order, Mr Lee said.

"We cannot afford to have international relations work on the basis that might is right. If rules don't matter, then small states like Singapore have no chance of survival," he said.

Mr Lee described the South China Sea, with the Strait of Malacca, as "two vital arteries" that connect Singapore to the world.

Ships sail down one of the sea passages and pass through the Singapore Strait to reach the other.

"Both of these are arteries - you block one, you die," he said.

Therefore, it is crucial that ships and planes continue to sail in or fly over the South China Sea despite the ongoing dispute there.

Finally, Singapore's voice on the international stage is much more effective when it is heard collectively with other Asean member states.

But Asean has found it hard to take a clear and common stand on the South China Sea as its members have different interests, he said.

In 2012, Asean failed for the first time in its 45-year history to issue a joint communique because members could not agree on whether to include the South China Sea dispute. Last month, there was a joint communique after the Asean foreign ministers' meeting avoided addressing directly the ruling by The Hague tribunal.

"If Asean can't deal with a major issue like this on its doorstep affecting its members, in the long run, nobody will take Asean seriously," he said.

Returning to Singapore's stance on the South China Sea dispute, Mr Lee said Singapore must stand firm on its beliefs.

"Other countries will persuade us to side with them, one side or the other, and we have to choose our own place to stand," he said.

A version of this article appeared in the print edition of The Straits Times on August 22, 2016, with the headline 'S'pore must stand by its principles on South China Sea'. Subscribe
Topics:
More
Whatsapp Linkedin FB Messenger Telegram Reddit WeChat Pinterest Print Purchase Article Copy permalink