Singapore has responded to an application by Malaysia to revise a 2008 international judgment that awarded sovereignty of Pedra Branca to the Republic.

The Ministry of Foreign Affairs said yesterday that Singapore has filed with the International Court of Justice (ICJ) its written observations on the admissibility of Malaysia's application.

The written observations are a "comprehensive rebuttal" to the application submitted in February this year.

"Singapore is confident of our case and our legal team. The next step is for the parties to present their oral arguments after the ICJ has fixed the schedule for the oral proceedings," the ministry said in a statement.

The country's legal team is helmed by four people.

The fourth is Attorney-General Lucien Wong, who took office on Jan 14.

Singapore's written observations are a comprehensive rebuttal to Malaysia's application. Singapore is confident of our case and our legal team. The next step is for the parties to present their oral arguments after the ICJ has fixed the schedule for the oral proceedings.

SINGAPORE'S MINISTRY OF FOREIGN AFFAIRS, in a statement.

In a Facebook post yesterday, Foreign Minister Vivian Balakrishnan said: "Their wisdom, experience and guidance have been invaluable to the younger lawyers on the team."

It took a "whole-of government effort" to produce Singapore's response, he added.

Singapore contends that the documents relied on by Malaysia in its bid to reverse the judgment do not satisfy the criteria under which it applied for a revision.

Malaysia had cited three documents to argue its point that "Singapore's officials at the highest levels did not consider that Singapore had acquired sovereignty over Pedra Branca from Johor" in the years following 1953.

It said two of the documents, which are from the United Kingdom National Archives, were declassified after the 2008 judgment. The third document's release date is unknown.

Malaysia based its application on Article 61 of the ICJ's Statute, which provides that an application to revise a judgment may be made when there is discovery of a fact that would be a "decisive factor" and was not known at the time of judgment.

The request for revision must be filed within six months of the new fact being found - in this case, Aug 4 last year - and 10 years of the judgment, which means the window for filing it closes next year.

In its May 2008 judgment, the ICJ had considered correspondence from 1953 between Singapore's colonial officials and Johor as being of central importance in determining the sovereignty of Pedra Branca. Johor's top official had written in a 1953 letter that "the Johor government does not claim ownership of Pedra Branca".

This shows, the court said, that while Johor had the original title, "as of 1953, Johor understood that it did not have sovereignty over Pedra Branca".

The three features in the Singapore Strait are located about 40km east of Singapore's main island.

It did not make a definitive ruling on the third feature, South Ledge, saying it belongs to whoever owns the territorial waters it sits in. 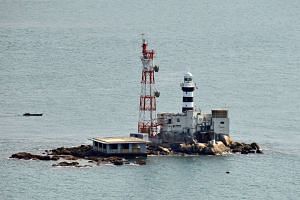