He makes clear that House will also be defined by its care for the weak, ambition to be inclusive

Widows, orphans, the destitute and seamen found their way yesterday into Mr Tan Chuan-Jin's parliamentary speech marking his election as the 10th Speaker.

Reminding MPs of what the first Parliament did in 1965 , he cited Bills that took care of big-picture matters: independence, defence and the first Budget.

But he quickly moved on to stress - in a way that might set the tone for his speakership, one hopes - what was also done for vulnerable groups. The message is clear: Under his watch, Parliament will also be defined by its care for the weak and its ambition to be inclusive.

First announced last Tuesday, Mr Tan's surprise nomination as Speaker triggered views online that he has been "demoted". In the chamber yesterday, the D-word was uttered by one MP - Nominated MP Chia Yong Yong.

She challenged those who viewed the move from minister to Speaker through the lens of the resulting lower pay packet. "Is that how we want to value each other - by how much we earn?" she asked. "How can we say that only Cabinet members can serve Singapore better? What about backbenchers? What about opposition party members? We all serve because we want to serve the public. And no office can limit the passion to serve. No office can limit the talent to make an impact." It was a powerful message of inclusivity from the only MP in a wheelchair.

Ms Chia's colleagues wasted no time advancing the inclusive agenda yesterday. Ms Tin Pei Ling (MacPherson) spoke on seniors not being left behind in the shift to cashless payments. NMP Thomas Chua urged against overlooking the needs of small businesses as industrial space is transferred from the Housing Board to JTC Corporation. Mr Louis Ng (Nee Soon GRC) submitted a petition on behalf of single mothers who face difficulties securing public housing.

Incidentally, the cause of single mothers is one that both Mr Tan and his predecessor Halimah Yacob have at various times taken up cudgels for. As minister for social and family development, Mr Tan won equal maternity benefits for unwed mothers - a fight that Ms Tin yesterday said "posed political risk" to Mr Tan personally.

Madam Halimah, when she was Speaker, also said she favoured allowing single mothers to buy subsidised flats directly from the HDB. To her, MPs paid tribute, even as they congratulated Mr Tan.

She has the courage of conviction, said Mr Christopher de Souza (Holland-Bukit Timah GRC). When sought, she gave him consent to table a private member's Bill on fighting drugs, and also took time to share with him her views on the children of drug addicts needing special protection, he said.

It was an eventful day for the former Speaker. She looks set to become president, as it was announced yesterday that she alone qualifies to run.

The onus is now on Mr Tan to show what kind of Speaker he will be. As Speaker, he has some unique powers to advance the inclusive agenda. How will he use them? 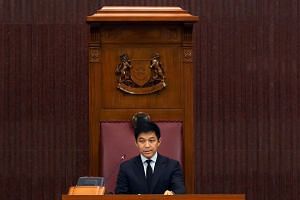 One immediate example: Mr Ng's petition will now go to the Public Petitions Committee, chaired by the Speaker himself. MPs are reluctant to say what this committee could do, as this route of policy or legislative advocacy - via petitions - is so untried. One possible scenario, an MP told The Straits Times, is for the committee to recommend that a Bill be tabled disallowing discrimination against a parent on the grounds of marital status.

This is just one of many issues.

Mr Tan's influence as Speaker will be watched closely in the months ahead.

On top of the petition, he had a full first day at work. Six Bills were tabled for first reading. Another three were debated and passed. Dozens of questions were answered by ministers. A motion on community sentencing was debated. Mr Tan moved things along efficiently. He showed his even-handedness by cutting short the speeches of both a frontbencher (Mr K. Shanmugam) and a backbencher (Mr Murali Pillai) for lack of time.

There was also some confusion at 4.30pm when he declared a break of 10 minutes - instead of the usual 20 to 25 minutes. His short explanation drew a chorus of laughter: "We are behind time." A fitting illustration, perhaps, of a man in a hurry to get on with his new role.