Strong GE 2015 result will help him hand over to new leadership after next elections, he says

Taking 69.9 per cent of the votes and 83 out of 89 seats was not just a good result for the PAP, but "a tremendous plus for Singapore", said Mr Lee, PAP's secretary-general, at the annual party meeting attended by some 1,500 activists yesterday.

Crucially, the solid mandate had enabled him to strengthen the team in the Cabinet, renew the ranks of MPs in Parliament and prepare to hand over to his successor and the next generation of leaders after the next general election, due by 2021.

The strong result also enables Singapore to complete the transition from citizens and leaders who experienced 1965 to a completely post-independence generation, he added.

With this election and the 2011 election, I have been able to assemble and gather together a new team to reinforce the team. And there is now time for this new team to gel and to take over the reins, well before the election after next.

PM LEE HSIEN LOONG, on how the solid victory for the PAP will enable a smooth leadership transition and ensure stability after the next general election, due by 2021

"It's a transition which we must succeed in, because it will show that Singapore will not just be exceptional once off, for one generation... but that we have institutionalised a system of governance, a society with the values and the resolution so that Singapore can endure."

Mr Lee elaborated on several measures that have been made possible by the PAP's "solid victory".

First, Singapore can carry out a smooth leadership transition.

"With this election and the 2011 election, I have been able to assemble and gather together a new team to reinforce the team," he said.

"And there is now time for this new team to gel and to take over the reins, well before the election after next," he added. 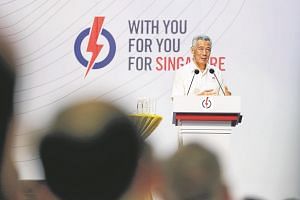 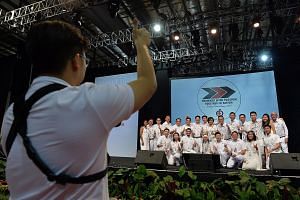 'Take the fight to opponents, even when the going is tough' 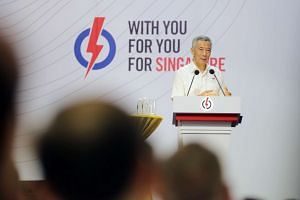 Second, Singapore will be able to transform its economy and society, and transition to a new phase of development.

And third, Singapore will be able to deal with external challenges as "one united people".

Mr Lee cautioned that bilateral relations with some countries might be challenging in the next decade as they face various difficulties.

"We need to be able to deal with this external rough weather without being weakened or distracted by internal divisions," he added.

Looking ahead, Mr Lee noted that the Government has been working on long-term plans, with master plans for policy areas such as ageing, sustainable living and transport. New parts of Singapore are being developed and heritage sites are being preserved.

He said the Government is working out the programme for its new term, with the PAP's election manifesto having set out the main ideas: building on the previous term's work but going further. It will see through works in progress, such as public transport improvements and MediShield Life.

And to look beyond SG50 to SG100, there is the Committee on the Future Economy and the public SGfuture discussions.

Mr Lee noted that two momentous occasions this year - founding Prime Minister Lee Kuan Yew's death and Singapore's 50th birthday - made Singaporeans realise "that we had worked together - the Government and the people - to build a special society".

"What will strengthen us further is not having all problems solved by Government, but to have Singaporeans doing things together, for one another," he added.

The SG50 celebration fund encouraged such ground-up initiatives, he noted. "The spirit is, get involved, get your hands dirty, get things done together."

To keep that spirit going, the Government is holding the Future Of Us exhibition and SGfuture conversations, to get Singaporeans working towards a shared future.

That is the kind of society that the PAP wants to build, he added, using a phrase from pioneer leader S. Rajaratnam: "a democracy of deeds".

If society is divided, politics will be divisive, Mr Lee said. But if society is cohesive, constructive politics has a chance to work, and the PAP can continue working for the interest of all Singaporeans, he added.