These include an ageing population, slowing workforce growth, a better-educated younger generation with higher expectations for career and family, and the impact of technology on society and work.

In the search for solutions, government officials from both countries came together to share ideas and experiences at a two-day forum, which ends today. It is being held at the Shangri-La Hotel.

Central to the discussion was how to develop leaders and policies for their countries to find innovative ways forward - the theme of the 6th Singapore-China Forum on Leadership.

The Singapore side is led by Mr Teo, who is also Coordinating Minister for National Security and Minister-in-charge of the Civil Service, and China by Mr Zhao Leji, Communist Party of China (CPC) Politburo member and Central Committee Organisation Department Minister.

In their keynote speeches, both spoke of the friendship between their countries and the importance of leadership development.

Mr Teo said: "The ability to have deep, wide-ranging and substantive discussions on such issues of national interest reflects the high degree of mutual trust between Singapore and China, as well as the depth, breadth and strength of our bilateral ties." 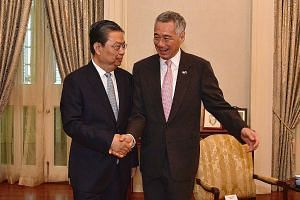 Similarly, Mr Zhao spoke of the longstanding friendship between both nations, which also share a consensus on the development of human resources.

"We are in a volatile time and the world is undergoing rapid changes, (and) neighbours wish each other well, just as loved ones do to each other," he told about 100 people.

As co-chairs of the forum, both leaders outlined how their people are being developed for the future.

Mr Teo said Singapore's innovative ways include broadening the concept of meritocracy to help people learn throughout their lives. This is to prepare them for new jobs and industries as technological advances, such as robots and artificial intelligence, disrupt routine jobs.

Singapore is also systematically deepening and broadening the experiences of a younger generation of political leaders, he added.

"We will need leaders at all levels, in the political arena and public administration, in the private and people sectors. Leaders who have the moral courage and integrity to do what is right, and not just what is populist," he said.

Mr Zhao said the development of human resources is the foundation of innovation and, in turn, growth.

Mr Teo said Singapore takes the long view in developing policies, which it adapts and improves along the way. To produce clean water, for instance, it looks for new methods to gradually reduce its dependence on water from Malaysia.

In implementing policies, the Government has made two changes: Services are more citizen-centric, like the automated tax return filing that makes it easy for people to pay taxes, and encouraging more ground-up initiatives.

Mr Teo said: "It recognises the Government may not have the answers to all issues, empowers citizens and promotes collective responsibility and ownership.''

China's focus is on the central ideology of socialism adapted to China's conditions, said Mr Zhao.

"Not all people should wear shoes of the same size... Similarly, not all governments should adopt the same model of governance. They should govern in ways that benefit their people," he added.

Minister for Education (Higher Education and Skills) Ong Ye Kung noted the similarities between Singapore and China, including being oriental countries.

"But besides Chinese culture and tradition, the Malay and Indian cultures, traditions and wisdom are also deeply ingrained in Singaporeans' collective consciousness."

He also said their difference in size means Singapore can be more flexible in trying out various solutions, and learn and improve if these do not work.

Earlier in the day, Mr Zhao visited the Lee Kuan Yew School of Public Policy and was hosted to lunch by Emeritus Senior Minister Goh Chok Tong, who is the school's chairman.