CANBERRA - Australia is more than 10,000 times the size of Singapore, and has abundant natural resources, while Singapore has none.

The societies of both countries are also quite different in their make up, with Australia mostly Anglo-Saxon and Singapore Asian.

Prime Minister Lee Hsien Loong pointed to these differences on Wednesday (Oct 12) as he spoke about how they belie the shared outlook and ethos of both countries that have led to a "deep friendship".

In a historic address to the Australian Parliament, he said: "How is it that Australia and Singapore, two very different countries - as PM Turnbull said, a wide brown land and a little red dot - can forge such a deep and long-standing friendship?"

"Yet we are good friends, because fundamentally, we have similar strategic interests and perspectives."

In his remarks, Australian Prime Minister Malcolm Turnbull thanked Mr Lee for having played a role in transforming both countries' relationship into a "partnership fit for the challenges and the opportunities of the twenty-first century". He also paid tribute to founding PM Lee Kuan Yew, whom he said was instrumental to developing the strong relationship between the two nations.

Speaking of how the relationship between both countries has "flourished", he said: "We are, after all, quite natural partners – highly sophisticated, educated and multicultural societies with open economies. Both our countries have embraced the opportunities presented by our steadfast commitment to rules-based trade to deliver more jobs and higher incomes for our people."

Mr Lee was speaking to Australian lawmakers in Canberra, the first Singaporean Prime Minister to do so in an honour reserved for the country's closest partners.

Earlier, Mr and Mrs Lee were welcomed to Parliament House by Mr Turnbull and other officials, as well as with a 19-gun salute. 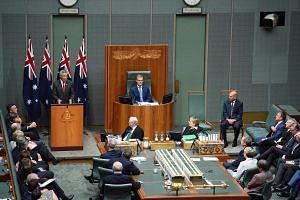 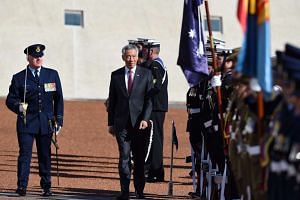 Mr Lee then inspected the guard of honour and band, which went on to play both Majulah Singapura and Advance Australia Fair.

Tracing the long-standing relations between both countries, Mr Lee recalled how Australia was one of the first to recognise Singapore's independence in 1965, and was the first country to establish diplomatic ties.

Even before that, Australian troops had fought bravely to defend Malaya and Singapore during the Second World War and against communist guerrillas during the Malayan Emergency which ended in 1960, he said adding that "Singapore will never forget their sacrifice".

Underpinning these relations are the similar strategic interests and perspectives that both countries share fundamentally, he said.

First, Singapore and Australia are both open economies that rely heavily on international trade and "need a stable and orderly world, in which countries big and small can prosper in peace", said Mr Lee.

"We both see the US as a benign force, playing a major role in fostering peace and stability in Asia. At the same time, we both have substantial ties with other major powers," he added. "For both of us, China is our largest trading partner. We wish to strengthen our cooperation with China, and welcome China engaging constructively in the region."

Second, both Singapore and Australia also want to deepen ties between Australia and South-east Asia, said Mr Lee. "Australia has decided that its future lies in Asia. Singapore believes that strengthening Australia's links with Asia will help to keep the region open."

On this front, Singapore and Australia had worked closely to launch the Asean Regional Forum where countries discuss political and security issues, he said. He pledged Singapore's continued support for Australia's engagement with Asean.

Mr Turnbull, in his speech later, said Singapore and Australia  "are at one in defending the rule of law and rejecting the proposition that might is right". This was especially important in the face of the terror threats which threaten the tolerance and diversity cherished by both countries, he added.

He said: "We seek a future for our region governed by shared norms of behaviour and respect for international law, and one marked by stable relations among the major powers."

He also said he was delighted that Singapore will be Asean's chair when Australia hosts a historic summit for Asean leaders in 2018,

Besides these strategic interests, said Mr Lee, Singaporeans and Australians also have similar outlooks on the people to people level: they value ethnic and religious diversity, and both societies are inclusive and multi-cultural; they are pragmatic, open and direct; and they frown upon rigid social hierarchies and both societies are egalitarian.

"We think and talk in clear practical terms, and therefore connect on the same wavelength. It does not mean that we agree on everything, but when we have different views we do not beat around the bush," he said.

He added: "We are informal, and can hang loose."

Recounting his first experience with Australian informality as a student on an exchange visit in 1967, Mr Lee said he had put on a tie for dinner with his host family, the Blanches. But their son had told him he was crazy and to take it off.

Having stayed in touch with the family for nearly 50 years now, he said: "I am sure many other Singaporean and Australian families enjoy similar close personal ties and lifelong friendships."

On Wednesday, Mr Graeme Blanch, his siblings Mr Balfour Blanch and Ms Heather Blanch as well as their spouses were also present in the Parliament House.

These similarities in strategic outlook and social ethos have led to cooperation between both countries in areas spanning trade, security and education, said Mr Lee.

For instance Singapore is Australia's fifth largest trading partner and investor, and more than 20,000 Australians live and work in Singapore.

The military of both countries also conduct joint exercises, and Singapore Armed Forces troops train in Queensland's Oakey and Shoalwater Bay and Perth's RAAF Base Pearce.

"We feel quite at home in each other's countries. Singaporeans may not quaff as much beer as Australians, but I have it on good authority that Victoria Bitter goes well with chilli crabs!" said Mr Lee.

He added that the Comprehensive Strategic Partnership (CSP) between both countries will take these close ties to another level, thanking Australian lawmakers from the Liberal-National Coalition, Labour and cross-benchers for their support.

Under the CSP, Singapore will jointly develop state-of-the-art military training facilities with Australia, and the Singapore-Australia Free Trade Agreement will also be upgraded, among other things.

Opposition leader Bill Shorten said his Labour party welcomes the CSP, as it represents "good news for the region and our region".

Mr Lee and Mr Turnbull are due to sign agreements for the first tranche of initiatives under the partnership.

Said Mr Turnbull: "Our bright future is not just about complementary interests and strengths, it’s about common human qualities... I am sure all members of this Parliament are immensely reassured that our relationship with Singapore springs from the heart, as much as it does from the head."

Referring to the partnership as a "milestone" in both countries' friendship, Mr Lee said it was fitting to celebrate it in Parliament House, which has a special link to Singapore.

The architect behind the building, Mr Romaldo Giurgola, had also designed the Safti Military institute in Singapore. Mr Giurgola had taken Mr Lee on a guided tour of Parliament House in 1989 to explain his architectural vision, which was to reflect the spirit of the institution in the building.

It was after this that Mr Lee had "felt much reassured that we had found the right architect".

Ending with the story, Mr Lee said: "In all these diverse and profound ways, our two countries are linked together: by our shared history, by strategic alignment, by shared ethos, by what we do together, and even by architecture. Our partnership is greater than the sum of its parts."