SINGAPORE - Law and Home Affairs Minister K. Shanmugam expects Singapore and some other countries to be "fairly quick" to ratify and put into force the Singapore Convention on Mediation.

But he said that he would not want to put a timeframe on when this would happen, as the legislatures in the countries - including Singapore's - would have to go through their own processes leading up to the ratification.

"But I think in international terms, I expect that this would be relatively fast. And I think next year, we will see more and more countries signing up. I would be surprised if it hasn't come into force before the middle of next year," he said at a press conference on Wednesday (Aug 7).

The United Nations (UN) Convention on International Settlement Agreements Resulting from Mediation was signed by 46 countries in Singapore earlier on Wednesday.

The international treaty - which would need to be ratified by three countries before it can come into force - will provide for the enforcement of mediated settlement agreements across countries.

Mr Shanmugam said that the convention has a framework, a model law which countries can look at.

He added that the countries' respective ministries - such as a Justice Ministry or a Trade and Industry Ministry - will have to work with their legal advisers and draft the laws to implement the treaty. "These things take some time," he said. 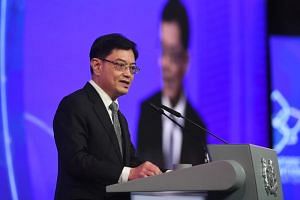 In Singapore's case, Parliament would have to pass a Bill before Singapore can ratify the convention.

Of the 70 countries which sent representatives to the Singapore Convention Signing Ceremony and Conference, held at the Shangri-La Hotel, 46 signed the international mediation treaty.

"Given that the UN passed its resolution in December of last year, we are talking about.. seven, eight months. It's quite unprecedented in terms of numbers for the signing ceremony," Mr Shanmugam said.

Mr Shanmugam said that the convention signing ceremony is one of five significant events taking place in Singapore that relate to the legal sector.

On Monday, Insol, a London-based umbrella body for restructuring and insolvency associations, launched its Asian arm in Singapore. On Thursday, Singapore will open the revamped Maxwell Chambers, and on the same day, the American Arbitration Association's International Center for Dispute Resolution will also set up its Asian hub here.