SINGAPORE - Singapore's two deputy prime ministers are making separate visits to Vietnam and China until next week during which they will meet with leaders from the two countries.

Deputy Prime Minister and Coordinating Minister for National Security Teo Chee Hean arrived in Vietnam for an official visit on Thursday (March 21) and will stay until Tuesday, according to a press statement from the Prime Minister's Office (PMO).

During his trip, Mr Teo will visit the capital city of Hanoi as well as Hue and Ho Chi Minh City (HCMC), where he will meet several leaders such as Vietnamese Prime Minister Nguyen Xuan Phuc and Permanent Deputy Prime Minister Truong Hoa Binh.

DPM Teo will also launch the Vietnam-Singapore Cooperation Centre, and officially open the Singapore Festival in Hanoi and the new chancery of the Singapore Consulate-General in HCMC.

He will officiate at the unveiling of Mapletree's V Plaza and opening of Oakwood Residence Saigon, and visit Keppel Land's Estella Place and Estella Heights, the statement said.

Additionally, Mr Teo will meet with members of the local business community and the Singapore community in HCMC. 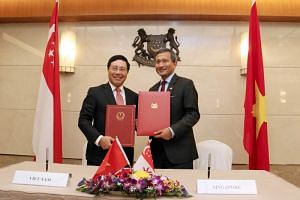 A separate press statement from the PMO said Mr Tharman will deliver a keynote speech on "The Future of the Global Financial Architecture" at the prestigious forum.

During his visit, DPM Tharman will also meet with several Chinese leaders and top executives of Chinese financial institutions including vice premier of China's state council Sun Chunlan and governor of the People's Bank of China Yi Gang.

Additionally, he will meet Beijing companies, and international business leaders who are attending the forum.