Efforts are also being stepped up to counter extremist and exclusivist influences online, at a time when radical groups abuse the Internet as a platform for their views.

The Office of the Mufti as well as the Religious Rehabilitation Group - which was formed in 2003 to help set right terror detainees - are working together to develop both print and online material to provide guidance in countering hardline ideologies. 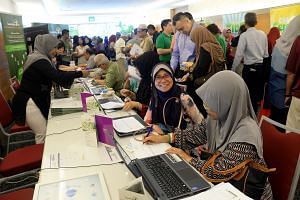 Parliament: Big push to get Malay/Muslim community ready for the future economy

Meanwhile, the part-time religious education programmes of the Islamic Religious Council of Singapore (Muis) - called aLIVE for children and youth, and Adil for adults - include lessons to help inoculate learners against online radicalisation.

"We are actively engaging parents on cyber safety for their children so that they are more critical of what they read online. In so doing, our young are better protected against radical teachings," said Dr Yaacob, who is Minister for Communications and Information.

He was responding to comments from Malay/Muslim MPs at the debate on the budget for the Ministry of Culture, Community and Youth, which Muis is a statutory board of.

The minister noted that over the past five decades, the Muslim community in Singapore has been guided by the principles of moderation and respect for people of different races and religions.

While it will be increasingly difficult to try and balance competing views and interests today, Dr Yaacob said the community had to instil - especially among the young - an appreciation of diversity. And he is confident that the community can remain committed to staying progressive and inclusive, while imparting the correct understanding of Islam.

"To me, being progressive is the ability to understand the modern world with an open mind and heart. It is our duty to seek knowledge, to read widely and beyond religious texts but also learn about other cultures, other religions and other societies so that we better appreciate what we have with us," he said.

"Taking part in candid but respectful discussions with people of different backgrounds will help us learn about each other. We need to be well-read and be respectful as we balance differences in ideas, concerns and interests and to gain a consensus to find the best possible solution."

Dr Yaacob also said there are plans to beef up the capabilities of religious teachers, who play a key role in guiding the community and impart such values as integrity, respect for human dignity, and compassion.

About 80 per cent of religious teachers here are registered under the Asatizah Recognition Scheme, and the community will study how to further enhance the scheme and encourage the remaining 20 per cent to take part as well.

The community also plans to do more for students pursuing Islamic religious education overseas: Muis' Student Resource Development Secretariat will become the Student Welfare and Careers Office, which will provide education and career guidance so students and parents can make informed choices.

And Muis will do its part to map out how Muslims in multicultural societies like Singapore can better shape a progressive ethos.

Muis, which has since 1968 issued over 500 fatwas to guide the community on wide-ranging aspects of religious life, will organise the inaugural Conference on Fatwa in Contemporary Societies later this year. It will bring together community leaders and religious scholars and highlight how Islam is practised in Singapore, and how religious guidance and social policies are shaped within the context of a multi-cultural and multi-religious society.

"We hope to build this conference into a platform for the discussion and dissemination of progressive religious thinking for minority Muslim communities living in a multiracial society," said Dr Yaacob.

Religious infrastructure is also being upgraded, with additional prayer spaces being provided at mosques. The site for the new mosque in Tampines North has also been decided: it will be built along Tampines Avenue 10, in the heart of the future Tampines North town.

Meanwhile, progress is underway for another two new mosques: Maarof Mosque in Jurong West will be ready later this year, while Yusof Ishak Mosque in Woodlands will be completed in early 2017.

Al-Istighfar Mosque in Pasir Ris, which is currently facing a space crunch, will have some relief later this year. A temporary covered prayer space opposite the mosque will cater to about 500 more congregants and the mosque itself will be upgraded for the longer term.

And Madrasah Al-Arabiah Al-Islamiah, currently sited in the old Poi Ching School on a temporary occupation licence, will have a new home next to the current building.

The six full-time madrasah are also tapping on technology in teaching and learning. Madrasah Irsyad Zuhri collaborated with the Infocomm Development Authority to set up a STEM (Science, Technology, Engineering and Mathematics) laboratory to expose students to game designing and educational robotics programming, while Madrasah Aljunied is piloting the teaching of Arabic Language using iBooks.

Dr Yaacob pointed out that the country's pioneers, like first president Yusof Ishak, stood for principles like moderation and inclusiveness, as they toiled to strengthen the social fabric of a multi-cultural and multi-religious nation.

"Our pioneers have shown us how we can remain rooted to our traditions, values and principles, and participate actively in our nation building efforts," said Dr Yaacob.

"It is up to us, therefore, to build upon their past efforts and nurture a cohesive and progressive Malay/Muslim community."

"Everyone has a part to play. Parents, teachers, professionals, community and religious leaders, and our young must continue to stand together and guard against any threat that seeks to divide us," he added.

"We have netizens who speak up with moral clarity against injustice and stereotypes, without anger or judgment. It takes the whole community to foster an environment of mutual respect, trust and understanding, so that we can achieve a cohesive society and a resilient nation."