SINGAPORE - He entered politics as one of the brightest stars of the 2006 batch of new PAP MPs and rose the fastest among his peers, becoming a full Cabinet minister in 2010.

But barely a decade after he entered politics and four years after taking on the Transport portfolio, Mr Lui is returning to private life.

On Tuesday, he said that he has decided not to stand in the upcoming General Election, a decision Prime Minister Lee Hsien Loong said he accepted reluctantly.

Before he entered politics, Mr Lui was a top civil servant, holding posts at the helm of the Republic of Singapore Navy and the Housing Board. 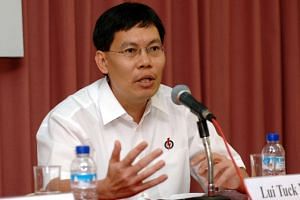 But he is most closely associated with the Transport portfolio, his second posting after being promoted to full minister in 2010.

Congestion on public transport emerged as a key source of discontent during the 2011 General Election, and Mr Lui's first task as the new Transport Minister was to find ways to ease the congestion quickly, while the country waited for new train lines were built.

Under his supervision in the last four years, the Ministry of Transport rolled out the Bus Service Enhancement Programme, which involved the purchase of 1,000 new buses and 80 new bus services to ease congestion. 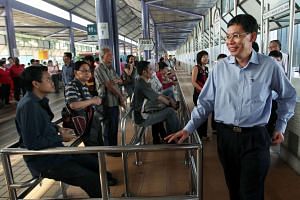 In this period, he also announced the opening of the new Terminal 5 at Changi Airport, and the Downtown Line, which overcame the bankruptcy of a major contractor to meet its opening target of this year-end.

But Mr Lui was also the man in the spotlight during the two biggest rail breakdowns in Singapore history, and a series of other smaller breakdowns across the MRT lines and the Bukit Panjang Light Rail Transport network.

On Dec 15 and 17, 2011, more than 220,000 commuters were affected by the disruption of the North South Line service due to power supply problems. 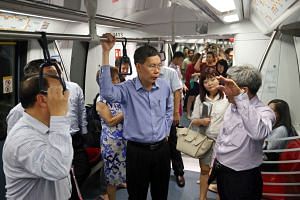 In July this year, both the North-South and East-West Lines were affected by power faults concurrently during the evening peak hours, affecting an estimated 250,000 commuters.

What looks to be one of Mr Lui's final acts in office was his announcement last week of up to 1.9 per cent decrease in bus and train fares.