SINGAPORE - Singapore has come a long way in building a nation where every citizen has equal standing and rights, but race still matters when it comes to politics and how people cast their vote, Prime Minister Lee Hsien Loong said.

This is why it is necessary to amend the Constitution to ensure a president from Singapore's minority races is elected from time to time, he said in an interview with MediaCorp broadcast on Sunday (Sept 4) night.

"We have come a long way. It's not a Chinese or Malay or an Indian nation. Everybody has his place, everybody is equal... People believe in this ideal and believe that we have made progress towards this ideal," he said.

"But at the same time, it doesn't mean that we have become colour blind because we are different races, different languages, different religions and those factors are still important to us and will be for a very long time to come." 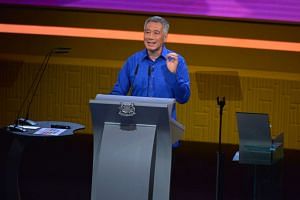 Mr Lee spoke on the issue of race and the elected presidency during his National Day Rally last month but he took ill and did not complete his prepared remarks on the topic.

In the TV interview shown on Sunday, he took the opportunity to explain his thinking on the subject, ahead of the release of a Constitutional Commission's report on proposed changes to the elected presidency, including ensuring a minority is elected from time to time.

Mr Lee cited a recent survey done by Channel NewsAsia and the Institute of Policy Studies that showed people were more willing to accept members of their own race marrying into their family.

A significant number of survey respondents also indicated greater acceptance for someone of their own race to be president.

This shows that race still counts in elections, Mr Lee said, adding that it means a Malay or Indian candidate for president will inevitably face difficulties that someone from the majority race might not.

"Not everybody will rule him out but some will find the hurdle higher and so he starts off at a disadvantage - and in a close election, that will make a big difference," he said.

And though all voters say they will vote for the best candidate, "that definition differs depending on which voter you ask, and race is one of the factors which goes into that", he added.

Mr Lee said it was important for a minority to be President from time to time, because the head of state represents all Singaporeans.

"Then people see that yes, this is my country. Someone like me can become the head of state, can represent the country. "

But Mr Lee noted: "The distinction is still there, it hasn't disappeared and I don't think it'll disappear for a long time."

Even in the United States, where the ideal is a melting pot, President Barack Obama was the first African-American elected to the post after 230 years of independence.

Mr Lee pointed out that fewer than half of White Americans voted for Mr Obama in the 2008 election, but 95 per cent of African-Americans cast their ballots for him.

"It shows that a black man can now win but it shows that race is still a big factor in American elections, which is not so surprising," Mr Lee said.

The figures put into perspective Singapore's position, that race is a factor "we have to accept and... take into account and decide what we're going to do about, to make sure our system will work properly".

Asked if provisions to guarantee a minority President might be seen as tokenism, Mr Lee replied: "I don't think it's tokenism. I think it's a very necessary symbolism of what we are as a multiracial society, what Singapore means, stands for and what we aspire to be."

As such, the mechanism that determines the head of state has to bear this in mind and "produce an outcome which is multiracial and which will reflect the colour of our society, the shape of our society".

Mr Lee acknowledged concerns that making such provisions in Singapore's case could be seen as giving a minority candidate an easier path to the presidency, and said such sentiments reflected the success of meritocracy.

"People want to succeed on their own merits and nobody wants to come in on a free ride and be seen that standards have been lowered for a particular race," he said.

"So whatever mechanism we do, we have to make sure that the same qualifying criteria apply, same standards, and there cannot be any relaxation or any doubt that the person who's elected is of that quality. And there are minorities who are of that quality," he said.

Mr Lee noted that when the President was appointed by Parliament, Singapore had "eminently qualified" presidents in Yusof Ishak, Benjamin Sheares, Devan Nair and Wee Kim Wee. "We want a mechanism which can produce this kind of an outcome, this kind of diversity as an assured outcome, which presently we don't have," he said.

Mr Lee was also confident the Chinese community would accept such a measure as "majority Chinese accept that we cannot be a Chinese-Chinese society and that was so right from the beginning".

"If they look at the elected President changes in that spirit, (as) part of being a harmonious, happy, multiracial society, then I think that people will understand and will accept and will support," he said.

Mr Lee also said although there is no political pressure to make these changes now, they had to be done for the nation's long-term good.

"We are not in a situation where the minorities are demanding something and the majority is pushing back and saying, 'We don't want it'," he said. "I think it is something that we need to do."