As Singapore's Jubilee year draws to a close, the man who helmed the national celebration believes it has sparked a new Singapore spirit and given people a greater sense of home.

"That to me is the biggest achievement of SG50," said Finance Minister Heng Swee Keat, who headed the SG50 Steering Committee.

The celebration also brought to the fore six highly desirable values, he added. They are: empathy, integrity, harmony, resourcefulness, resilience and responsibility.

These strengths are important for reinforcing the Singapore spirit to lift the country to the next level, he said as he took stock of SG50 in an interview with the media earlier this month.The experience has already given him ideas for the next lap, part of which he leads as chairman of the Committee on the Future Economy.

The other part is the SGfuture dialogue series, led by Minister for Culture, Community and Youth Grace Fu and Minister in the Prime Minister's Office Chan Chun Sing. 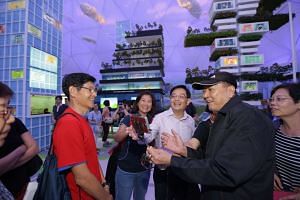 NEXT PHASE OF NATION-BUILDING

Let us start another new phase of our nation-building, which is to mobilise all our fellow Singaporeans... to give ideas and to act on those ideas.

Mr Heng identified two key focus areas for the new journey: strengthening the sense of "one people", and keeping the economy vibrant.

To build on the SG50 momentum, the Government did not wait.

The SGfuture dialogue series took off this month and will run until the middle of next year, during which Singaporeans will discuss issues such as building a sustainable home and fostering a caring community, among others. The dialogues will draw inspiration from the ongoing Future Of Us exhibition, which presents possible scenarios of life in Singapore years from now. They will be organised by non-profit organisations and government agencies.

By the year end, organisers would have held 16 sessions with more than 800 participants, said the SGfuture secretariat.

But beyond the series of dialogues, Mr Heng wants to encourage people to get their ideas off the ground and transform them into reality by, for instance, starting projects of their own or volunteering with non-profit organisations.

To bolster their efforts, he said the Government will look at ways to back SGfuture projects, like facilitating tie-ups or pointing groups to funds they can apply for. Further announcements on this could be made during next year's Budget announcement in March.

The Committee on the Future Economy is gearing up for take-off next year and there are plans to get ordinary Singaporeans involved in discussions, Mr Heng said.

"We need to continue to keep the economy vibrant in order to generate resources for us, and opportunities for our people to realise their aspirations," he added. While the Government plays an important role in getting economic policies right, he said, the energy to do better at work and the creativity to start new businesses must come from the people.

Calling on Singaporeans to take part in shaping the country's future, he said: "Let us take it beyond the Our Singapore Conversation, and beyond the SG50 celebration.

"Let us start another new phase of our nation-building, which is to mobilise all our fellow Singaporeans... to give ideas and to act on those ideas."