SINGAPORE - The Singapore Democratic Party (SDP) has what it takes to run a town council, and that will be a core message at its rally on Friday, said party chief Chee Soon Juan.

He told reporters on Thursday that the party will give details on how it will ensure a smooth takeover of the town council from the People's Action Party (PAP) should he win the Bukit Batok by-election.

It will also outline specific goals on the town council transition for the first 100 days after the election, he added in a bid to assure residents their estate will be in good hands in spite of a change in party.

"We want to make sure the voters here know how serious we are about ensuring a smooth takeover of the town council," he told a media conference outside Bukit Batok MRT Station, where he handed out campaign fliers to the evening rush hour crowd and posed for photographs with supporters.

The SDP had, last May, released a town council management plan that, among other things, sets targets and deadlines, such as aiming to gather all of the town council's financial information within the first 30 days of taking over.

The party has also named a four-man resource panel to advise it on town council issues in the first 100 days if Dr Chee is elected.

Besides town council issues, Dr Chee said, speakers at the rally will touch on the topic of job security amid the economic slowdown. 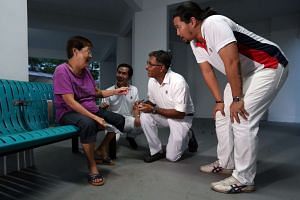 Dr Chee was also asked if he had reached out to the voluntary welfare organisations (VWOs), such as Fei Yue Community Services, that the PAP has roped in to help with social programmes in Bukit Batok. 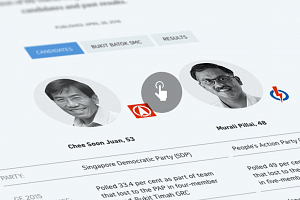 He replied that he was confident that the VWOs will remain involved in the various social programmes if the SDP wins the by-election on May 7.

He added that a "truly caring candidate" would hope for the VWOs to stay on to help the community, whether or not he is elected.

Dr Chee began his day at the MRT station on Thursday reaching out to voters on their way to work before doing his usual round of house visits. He also gave several media interviews.

In the evening, he said that, with Nomination Day over, he sensed that residents are more tuned in to the ongoing campaign as Polling Day nears.

But he declined to speculate on whether the month of groundwork he has put in has made an impact on voters.

"We don't have time right now to conduct all these little polls," he said. "The most important poll we will encounter is the one on May 7."