SINGAPORE - The Singapore Democratic Party (SDP) might have lost in the Bukit Batok by-election, but the party remains determined to continue working for residents of the single member constituency, SDP chief Chee Soon Juan said on Sunday (May 8).

"We're feeling just as determined as we were before we came into this elections," said Dr Chee, who was the SDP's candidate in the by-election. "None of that has changed."

Dr Chee received 38.79 per cent of the vote on Saturday (May 7) compared to the People's Action Party's Murali Pillai, who garnered 61.21 per cent.

Speaking to reporters after an hour-long drive around the estate to thank Bukit Batok voters on Sunday, Dr Chee said that the promises he made to Bukit Batok voters "weren't just for consumption and then, after the situation, we don't continue". 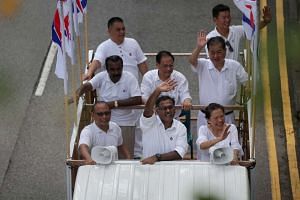 Murali Pillai thanks residents of Bukit Batok, to be sworn in on Monday

But he stopped short of giving specifics about how he intends to build on his result in Bukit Batok - his best performance in five electoral outings - and said he is constrained by "the PAP town council".

"This question is better put to the PAP town council because, every time we make a move, they stop us," he said, citing an application to hold a health screening event during the campaigning period that Dr Chee said was turned down.

He asked: "You need space, physical space, to talk to people, explain to people, right? If we can't use space there, what are you going to do?"

Despite these constraints, the SDP chief said the party will resume its outreach work after taking the next few days to analyse the by-election results, and that residents can "rest assured we will do whatever we can".

"We will continue doing what we've done before: as we have with Marsiling-Yew Tee, with Holland-Bukit Timah, and the constituencies I've contested," he said.

"We will continue to do all these things and see what we can do to serve the residents as well, and for them to get to know us better."

This much was clear during the thank-you parade, where Dr Chee and seven other members of SDP made their way around the estate, shaking hands and waving to supporters.

The loudspeakers blared: "Thank you residents of Bukit Batok for your support and encouragement. We look forward to seeing you again."

Even though it was a sleepy Sunday morning missing the week-day rush hour crowd, the handful of residents around Bukit Batok central waved back. There were shouts of "thank you sir" and "never say die".

The shouts of encouragement seemed to energise a visibly-tired Dr Chee, who spent the grueling nine-day campaign holding four rallies and many hours walking and cycling around the neighbourhood.

Dr Chee said he will keep trying to raise awareness about issues he raised during the campaign - about the economy, the Central Provident Fund, sovereign wealth fund GIC and state-owned investment company Temasek Holdings - as "these are still issues that Singaporeans should be worried about".

"It is a journey, a process, regardless of the outcome of this election," he said.