Businessman Salleh Marican has taken issue with a New York Times (NYT) report that cited him, saying what it attributed to him was untrue.

Mr Salleh, 67, said in a Facebook post that he has written to the NYT editor to ask for a clarification.

The NYT piece on Tuesday, "Singapore has a new president, no election needed", reported that Mr Salleh "had said that if he was elected, he would begin an investigation into the allegations that Mr Lee (Hsien Loong) abused his power in his dispute with his siblings".

Mr Salleh said: "That quote was untrue. I never said it and have not given any interview to The New York Times."

He was one of two businessmen who had applied to contest the election, but were deemed ineligible as they did not meet the threshold for candidates from the private sector.

President Halimah Yacob was elected uncontested on Wednesday and sworn in on Thursday.

Mr Salleh believes the NYT report was based on a quote he had given sociopolitical website TOC in an interview.

In the interview with TOC published on Sept 1, Mr Salleh, the chief executive of Second Chance Properties, was asked a hypothetical question about how he would use his presidential powers if he won.

He was asked whether he would be willing to use his powers as president to direct the Corrupt Practices Investigation Bureau to open an investigation into PM Lee if there were credible allegations against the Prime Minister.

The TOC had cited as an example the dispute between PM Lee and his siblings over their family home in Oxley Road. 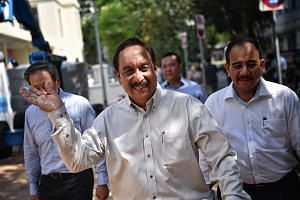 PM Lee's siblings had accused him of abusing his powers to prevent the house's demolition, an allegation he has denied and addressed in Parliament.

He said: "One of the reasons I want to be president is to do my best to ensure that the zero tolerance towards corruption continues. This has contributed to the clean reputation of this country.

"As president, the people of Singapore can count on me to uphold and protect Singapore's precious reputation."