SINGAPORE - The police on Sunday (Sept 10) issued a traffic and security advisory for Nomination Day, reminding candidates and the public of the rules.

The nomination centre at the People's Association headquarters along King George's Avenue will open from 10am on Wednesday, with the public advised to arrive only after that time.

Nomination proceedings will commence from 11am.

Candidates are reminded to arrive early, while only vehicles with approved decals will be allowed to enter and park within the nomination centre.

The police will be conducting checks in and around the venue, for dangerous items such as sharp objects and flammable liquids or gas.

Supporters should also refrain from bringing bags, as any bags and belongings brought into the centre will be checked.

Placards, flags and banners in support of any candidate are not allowed to be displayed in the centre before the closure of nomination proceedings, and supporters should assemble and disperse in an orderly manner. 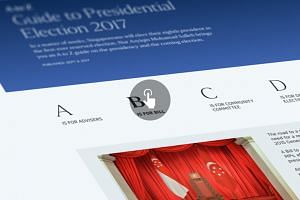 Interactive: A to Z guide to Presidential Election 2017

Unmanned aerial vehicles or drones should not be flown into or over the centre.

The police added that will be monitoring the situation at the centre, and will take action against anyone who is unruly or committing any offence.

Singaporeans will know on Nomination Day if they will get to cast their vote or if the election will be a walkover.

The Presidential Elections Committee is screening the three presidential hopefuls - former Speaker of Parliament Halimah Yacob and businessmen Salleh Marican and Farid Khan - and will inform them if they qualify to run for the position by Tuesday.