SINGAPORE - Singapore and the Philippines are taking steps to boost economic cooperation, with local companies encouraged to venture beyond capital Manila.

Cities such as Davao and Cebu are among prospective places they are urged to consider by International Enterprise (IE) Singapore, the agency that promotes international trade and partners Singapore companies in going global.

IE Singapore is also devoting more resources to step up its presence in the Philippines next year, said President Tony Tan Keng Yam on Thursday (Dec 15).

He was speaking at a banquet in the Istana in honour of Philippine President Rodrigo Duterte, who is on a two-day state visit to Singapore.

Dr Tan said Singapore companies are keen to invest in the Philippines, one of Asia's fastest-growing economies.

Despite its small size, Singapore is the Philippine's fourth-largest trading partner, after giants US, China and Japan. It is also a top Asean investor in the Philippines. 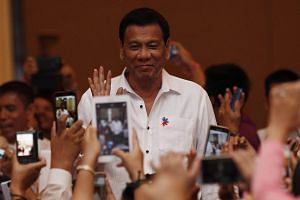 He cited SIA Engineering and Singtel, both of which have operations in the Philippines.

Dr Tan noted that IE Singapore helped some Singapore companies in the renewable energy and consumer sector to get their first projects in the Philippines.

President Duterte and his Trade and Industry Secretary Ramon Lopez are slated to meet Singapore business leaders on Friday (Dec 18).

Singapore receives about 700,000 Filipino tourists each year and they "enjoy visiting Universal Studios and Gardens by the Bay, as well as eating satay, chili crab and chicken rice".

Singaporeans, in turn, enjoy the natural beauty of the Philippines, from its beaches to majestic mountains, as well as its cuisine.

They are also no strangers to Filipino artworks, which are on abundant display in the Singapore Art Museum and National Gallery.

"Such exchanges enrich our societies and enhance mutual understanding of our cultures," said Dr Tan.

With better connectivity between the two countries - and to the regions beyond - people-to-people exchanges can continue to grow, he added.

"This way, fellow Singaporeans will be able to see what my wife and I saw during my state visit to the Philippines in 2014 - a fellow South-east Asian nation that is resilient, hardy and talented."

Dr Tan also underlined the history that binds Singapore and the Philippines.

When revered Philippine national hero Jose Rizal left his country in the late 19th century, Singapore was one of his first ports of call.

Between 1882 and 1896, Dr Rizal visited Singapore four times, making detailed records of the sights and sounds of pre-independent Singapore.

His insights provided a valuable account of 19th century Singapore, said Dr Tan. And today, a memorial of him stands on the grounds of the Asian Civilisations Museum.

"Since those days, the exchanges between the Philippines and Singapore have blossomed, especially after diplomatic relations were established in 1969," he said. "Today, our two countries enjoy a robust friendship anchored in a shared vision of peace, harmony and prosperity for our countries and the region."

As founding members of Asean, both countries also share a vision of maintaining peace and stability for the region, he added.

Next year , when Asean turns 50 , the Philippines will be chairman if the regional grouping. "You may be assured of Singapore's support for your chairmanship," he said.

President Duterte, who spoke after Dr Tan, said in his speech that the two nations are further intensifying two-way trade and commerce, and expanding opportunities for investments to flourish.

“Indeed we have done much and we can do more,” he said.

He added: “I came to Singapore with a singular purpose: to renew and reaffirm the friendship and cooperation between our nations and people.”

"President Tan and President Duterte agreed that there was room to further broaden and deepen bilateral relations, including strengthening security cooperation," said the Ministry of Foreign Affairs (MFA).

Mr Duterte and Mr Lee had a "fruitful exchange". "Both leaders agreed that Asean should work together to deal with transboundary challenges such as human and drug trafficking and terrorism," MFA said in a statement.

“We had defined areas of our cooperation and this trip was really intended for the President to really get to know our Asian leaders and to relate to them especially since we (the Philippines) will be having our Asean chairmanship next year,” Yasay said.

He added that “a lot of” areas of mutual cooperation were discussed by the leaders particularly in the fight against terrorism and against illegal drugs.

Also discussed in the meeting between the leaders at the Istana, according to the foreign affairs secretary, was border security against transnational crimes.

“These are basic things that we both agreed to pursue,” he said.

Mr Duterte will meet Mr Lee again on Friday for lunch. He will also visit the Singapore Botanic Gardens where an orchid will be named in his honour.

He will then meet the Filipino community in Singapore before departing for the Philippines.