The relationship between Singapore and Indonesia has prospered, Prime Minister Lee Hsien Loong and visiting Indonesian President Joko Widodo noted at their fourth Leaders' Retreat yesterday, as they expressed the hope that ties will grow stronger in the next five years.

The meeting comes ahead of Mr Joko's swearing-in for his second term in two weeks' time. President Joko, better known as Jokowi, and Vice-President-Elect Ma'ruf Amin had won the April presidential election on a joint ticket with 55.5 per cent of the vote.

At the Singapore-Indonesia Leaders' Retreat at the Istana, PM Lee congratulated Mr Joko on his re-election and said he looked forward to attending his inauguration.

"I am very happy that in President Jokowi's first term, we have built an excellent relationship of trust and cooperation," PM Lee said at a joint news conference with Mr Joko after they concluded what PM Lee described as a "very good meeting".

PM Lee added that he hoped to deepen the relationship with the President and his new Cabinet to bring the relations between the two neighbours to a higher level.

Mr Joko, who is on a two-day visit, received a ceremonial welcome at the Istana, and the Singapore Armed Forces Military Band played both countries' anthems.

At the retreat, a long-held tradition in which leaders and ministers meet informally each year to discuss ways to strengthen ties, both leaders took stock of their wide-ranging cooperation across the economic, people-to-people and security sectors, and discussed how to build on this strong foundation.

"We both reaffirmed our commitment to continue strengthening our mutually beneficial relations between our two countries," Mr Joko said at the news conference.

He and PM Lee also noted with satisfaction that economic links between both countries have expanded steadily over the years, with cooperation in trade, investments and tourism growing from strength to strength.

Two pacts were also inked by the two countries yesterday, witnessed by their leaders.

The first was the Agreement between Indonesia and Singapore on Electronic Data Exchange to Facilitate and Secure Trade, which will link the one-stop e-Customs facilities, commonly known as national single windows, of both countries. It seeks to bring about a seamless, paperless and secure business environment for bilateral trade. 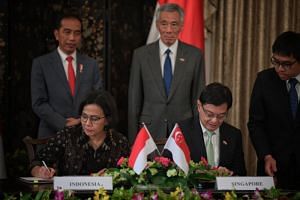 Leaders' Retreat: S'pore and Indonesia to renew US$10b currency pact for another year

Singapore and Indonesia looking out for new opportunities to work together: Vivian Balakrishnan

He welcomed Mr Joko's interest for both sides to continue to deepen human resource cooperation, an area which ranks high on the President's priorities in the next five years. The leaders agreed on the importance of developing and upskilling human resources to meet the needs of their industries and support their expanding economic ties.

Singapore, PM Lee noted, had trained thousands of Indonesian officials and trainers under more than 20 bilateral agreements. There is scope for more student exchanges and internships for youth to spend time in each other's country, he added.

The leaders also agreed to continue to make progress in other areas, from financial and transport cooperation to strengthening connectivity between their two countries.

Apart from economic collaboration, the leaders also discussed security relations, and welcomed the strong and longstanding ties between their defence establishments and militaries.

They also agreed that the good relations between them and their countries have paved the way to discuss longstanding issues such as airspace management and military training in an "open and constructive manner", said PM Lee. Both sides have agreed on a framework to discuss both issues, he added.

The leaders also pledged to strengthen people-to-people ties, and have tasked their officials to organise a Singapore-Indonesia Civil Service Forum for public servants from both sides to learn from each other's best practices.

The evening was capped by a dinner which PM Lee hosted for Mr Joko and his delegation.

PM Lee said bilateral ties were in good shape, "deep, multi-faceted and forward-looking", and added that much had been achieved during Mr Joko's first term.

"I look forward to sustaining this positive trajectory and carrying it forward in his second term.

"I am confident we can do more together to take relations to new heights and realise our win-win cooperation for the mutual benefit of our people," he added.

Mr Joko welcomed this, saying: "Let's continue working together for the prosperity of our two countries and people."