Prime Minister Lee Hsien Loong will be in Bali for two days to attend a Leaders' Retreat with Indonesian President Joko Widodo, and an Asean leaders' gathering.

He will also participate in a dialogue with World Bank Group president Jim Yong Kim at the Human Capital Summit.

The Leaders' Retreat, which takes place on Thursday (Oct 11), will be PM Lee's third with President Joko, popularly known as Jokowi.

Their previous retreat was held in Singapore in September last year, when they also commemorated the 50th anniversary of the establishment of diplomatic relations between Singapore and Indonesia.

At tomorrow's retreat, the two leaders will review the progress in bilateral relations and discuss ways to deepen cooperation. They will also exchange views on regional and international developments.

The two leaders will witness the signing of several bilateral agreements as well, to strengthen cooperation in investment promotion and protection, financial technology and the arts.

One of them is the Bilateral Investment Treaty, which will establish rules on how Indonesia should treat investments and investors from Singapore, and vice versa.

The treaty will ensure that the investments of companies operating in the other's land are protected, on top of the protection already accorded under each country's domestic laws. 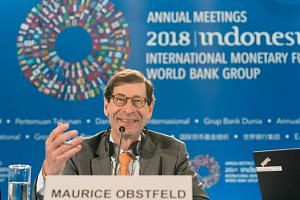 Protecting the interests of investors will also promote greater investment flows between Singapore and Indonesia. For example, the pact ensures that investors have the freedom to transfer capital and profit across borders and protect their funds and assets from being expropriated illegally.

Other agreements will also be signed on the sidelines of the retreat to boost collaboration in areas such as tourism, maritime training and industry development.

One of them will intensify cooperation in cruise tourism, an area both countries are keen to develop.

It will see Genting Cruise Lines and state-owned terminal operator Pelabuhan Indonesia III team up to develop facilities at the Indonesian port of Celukan Bawang for bigger cruise ships of up to 350m to berth directly.

At the Asean leaders' gathering, also taking place on Thursday, PM Lee, President Joko and their Asean counterparts will discuss sustainable development goals and how to overcome the development gap.

The discussions will also involve heads of the United Nations, the International Monetary Fund and the World Bank Group.

PM Lee is scheduled to return on Thursday. During his absence, Home Affairs and Law Minister K. Shanmugam will be Acting Prime Minister.