SINGAPORE - Prime Minister Lee Hsien Loong delivered a speech at the swearing-in ceremony of President Halimah Yacob at the Istana on Thursday (Sept 14).

Here is his address in full:

We are here this evening to witness the inauguration of Madam Halimah Yacob as the 8th President of the Republic of Singapore.

Madam President, congratulations on your election.

Madam President, your story reflects the Singapore Story – how we have come this far together, and what we aspire to be as a nation. You have overcome difficult challenges in your life. Your early years were of hardship and deprivation. But you studied and worked hard, to get a good education and a steady job to support your family. In time you achieved success, but you never forgot the poverty of your childhood. You went out of your way to help those in need, and enable many others to succeed as you yourself have done.

Your life story symbolises the sort of society that we aspire to be, and reminds us that the Singapore Story is one of hope and opportunity. In Singapore, no matter where we begin in life, if we work hard, we will have ample chances to do well; and when we make good, we have a responsibility in turn to help others around us.

Madam President, you bring to the Presidency a heartfelt concern for your fellow citizens, a strong sense of duty, and a sterling record of public service.

As a unionist, you championed workers’ interests. As a social activist and community leader, you cared for the underprivileged, and groups in need of special help. As a Member of Parliament, you worked with residents to solve their problems and brought people together to build a community.

As a Minister of State, you worked with youth groups to engage their energies and idealism, improved childcare services to support working mothers, and enhanced support for the disabled by setting up the Centre for Enabled Living, which later became SG Enable.

As the Speaker of Parliament, you were even-handed and fair to all MPs, encouraging robust debates on national issues, while maintaining decorum and order in the House.

Your wealth of experience in public service has prepared you for your new duties. The President has important custodial powers over the nation’s past reserves and key public service appointments. When exercising these custodial powers, you have to make independent judgments on the issues before you, taking full advantage of the experience and advice of the Council of Presidential Advisors. At the same time, the President has to work closely with the Government, for the two-key mechanism to function properly. I look forward to establishing such a relationship with you, just as I did with your predecessors.

However, there is a significant difference between being President and your previous posts. Hitherto, you have been fighting the good fight – in the unions, in the political arena, in the governing party. Now as President, you have to be non-partisan and above the political fray. The highest office in the land, the President is the symbol of the nation. As the President, you have to be the unifying figure of our nation and represent all Singaporeans. I am confident that you will adapt to this new role, and perform it with distinction.

Your swearing-in today is therefore a significant moment in our history. Today, we reaffirm the pledge that Mr Lee Kuan Yew made on 9 August 1965, in the very first hours of our independence, that this would not be a Malay nation, a Chinese nation nor an Indian nation. Everybody would have his place, equal: regardless of language, culture, religion.

When Mr Lee made this pledge, we had a Malay Head of State. President Yusof symbolised, visibly, that though we had been forced out of Malaysia primarily because we were a Chinese-majority city, independent Singapore would never in turn suppress its own non-Chinese minorities. We chose the nobler dream: A multi-racial, multi-religious Singapore.

Madam President, half a century later, you symbolise, visibly, that Singapore will persevere with this dream. This has become all the more urgent considering the trends in our region and the rest of the world. In an age when ethnic nationalism is rising, extremist terrorism sows distrust and fear, and exclusivist ideologies deepen communal and religious fault lines, here in Singapore we will resist this tide.

Here, the majority will make extra efforts to ensure that minorities enjoy equal rights. That is something special, precious and fragile. That is why we make sure that Parliament always has representatives from all ethnic groups. Now we will regularly have a Head of State, the symbol of the nation, who can look like President Benjamin Sheares, who was a Eurasian, President SR Nathan, who was an Indian, President Tony Tan, who was a Chinese, and President Halimah Yacob, a Malay and a woman. Indeed that was the compelling reason the Government amended the Constitution last year.

Madam President, Encik Yusof Ishak was President of all Singaporeans, regardless of race, language, religion or gender. You too will unify all of us. You too will strengthen our sense of nationhood. You too will be our President. 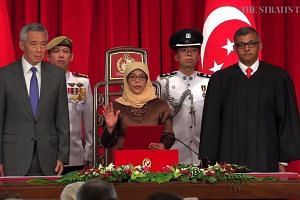 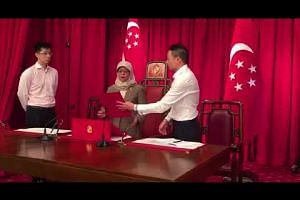 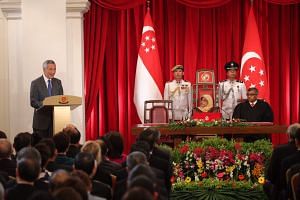 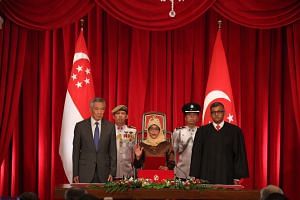 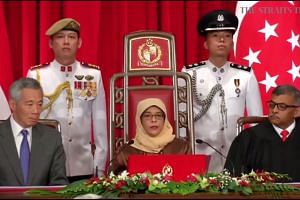 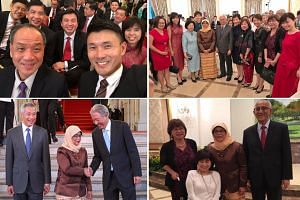 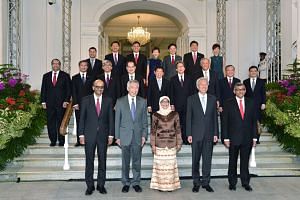