As a result, the terms of the agreement to de-escalate an ongoing maritime boundary dispute have not been implemented yet, Foreign Minister Vivian Balakrishnan said in Parliament yesterday.

Dr Balakrishnan said the Malaysian government vessels, which have been "illegally anchored" in the Republic's waters since early December, would have to move out as part of the deal struck on March 14.

In the deal, Malaysia and Singapore agreed to return to their port limits prior to Oct 25 and Dec 6, and that no commercial activities or anchoring of ships would be allowed in the area, said Dr Balakrishnan.

"Our ships will continue to patrol and to take appropriate enforcement actions within our territorial waters," he said in his reply to Mr Ang Wei Neng (Jurong GRC), who asked for an update on the maritime dispute.

Dr Balakrishnan said that if the recommendations are implemented by April 14 - a month after the agreement - then negotiations for maritime boundary delimitation will start within a month.

"We hope that the recommendations will be implemented as soon as possible within the agreed timeframe," he said, adding that this will de-escalate the ground situation for talks to start, a process that will take time. 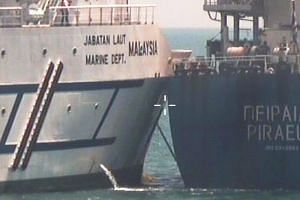 Singapore will not allow any foreign government to assert authority in its waters, says Vivian Balakrishnan

He added that these measures will be taken without prejudice to the maritime claims of both countries.

Following the move, Malaysian government vessels have made repeated intrusions into Singapore's waters.

In response, Singapore extended its own port limits on Dec 6 to the full extent of its territorial waters.

On Feb 9, a Greek-registered bulk carrier which made an error in a turning manoeuvre collided with the Malaysian government vessel Polaris, which was anchored in a non-designated anchorage in the Singapore Port Limits.

Dr Balakrishnan said in Parliament: "But both sides are committed to negotiate in good faith, and in the event that we are unable to arrive at an amicable solution on delimitation, we may mutually agree to resort to an appropriate international third-party dispute settlement procedure on terms to be mutually agreed by the parties."

He added: "Overall, this agreement is a positive and concrete step forward for both countries, and is reflective of Singapore's commitment to resolve our issues with Malaysia in a calm and rational and amicable manner in accordance with international law, and to nurture this very important bilateral relationship whilst safeguarding our national interests."