SINGAPORE - How to get more people to return their trays at food centres?

The answer may simply be: Put up more reminders.

At two hawker centres, reminders to return food trays - emblazoned on banners, tables and even aprons worn by cleaners - have had good results, said Senior Minister of State for the Environment and Water Resources Amy Khor in Parliament on Tuesday (March 6).

For example, at Zion Riverside Food Centre, four months after these reminders were introduced in March last year, more patrons returned their trays and dirty cutlery to designated tray-return stations.

From a daily average of five in 10, the return rate went up to seven in 10, based on an assessment last year by the Ministry of the Environment and Water Resources.

The rate of tray return has also improved at Adam Food Centre in Adam Road, from 9 per cent in July last year to 51 per cent in November, after tray-return reminders were placed on banners and the T-shirts of cleaners, and made through regular audio announcements.

She said that inculcating a tray-return habit can ease the work of cleaners, allow for faster turnover of tables and improve hygiene. 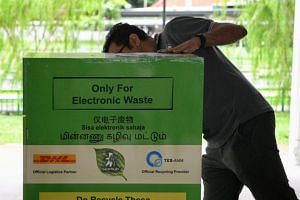 Not sure how to recycle your mobile phone? More in-store e-waste collection bins to be set up

Sharp drop in water use in Singapore; water price hike among factors

A common misconception is that encouraging people to return their trays may deprive cleaners of their jobs, said Dr Khor, but she added that this was not the case.

In January, the National Environment Agency said it would introduce a system at up to 25 hawker centres in the coming years where consumers are charged a deposit for a tray, typically 50 cents or $1 a tray. The deposit will be forfeited if patrons do not return food trays.

But some members of the public voiced their unhappiness with the idea.

Meanwhile, hawkers at Zion Riverside Food Centre said the good tray-return rate was the result of efforts by both hawkers and cleaners.

Mr Peter Tan, 57, chairman of the hawker centre's hawkers' association, said hawkers and cleaners of the centre would even personally remind patrons to return their trays.

Patrons of the 32-stall hawker centre opposite Great World City said the centre has become cleaner.

It has become easier to find clean, empty tables, said administrator Veronica Mah, 60, who eats at the centre daily. "It makes it easier for the next person," she said.

Hawkers can also focus on cooking, instead of worrying about running out of clean cutlery to serve their food in - something which used to happen every day during lunchtime for Mr Tan, who sells satay and other barbecued food.