SINGAPORE - Finding open-air parking will soon get easier for drivers here, with an upcoming digital service that will let them check the availability of spaces before reaching a parking area.

This is one of several new initiatives announced by Minister-in-charge of the Smart Nation Initiative Vivian Balakrishnan on Thursday (Feb 28) in Parliament, when providing updates on Singapore's Smart Nation efforts.

"This year, the Government Technology Agency, Urban Redevelopment Authority (URA) and Municipal Services Office will be trialling the installation of smart sensors so that we can provide real-time availability of kerbside parking lots to people who are looking for a lot," said Dr Balakrishnan, who is also the Foreign Minister.

He was speaking during the debate on the budget of the Prime Minister's Office, which the Smart Nation and Digital Government Group (SNDGG) comes under.

In response to queries from The Straits Times, SNDGG said the trial of this new parking service will start by end-June and will be held for six months at the on-street parking spaces in Telok Ayer Street and Temple Street.

During the trial, motorists can access information on the availability of parking spaces along these two streets via the URA website, and the existing "Find Parking" module in the OneService app, which allows people to report municipal issues like clogged drains.

Digital services to benefit everyday lives as well as businesses

Depending on the trial's outcome, the information on the availability of on-street parking spaces could be included in the Parking.sg app at a later phase. Parking.sg lets motorists pay for public parking electronically and by the second.

Dr Balakrishnan said the Parking.sg app is already used by more than 60 per cent of car owners here, and the Government wants to make it easier for drivers to find parking.

The Moments of Life app, which provides services and information needed by parents and caregivers of young children on a single digital platform, will also be enhanced to help citizens plan for end-of-life matters, and empower seniors to lead active lives, he said. 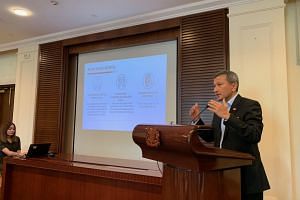 He also said that SingPass Mobile, used to secure citizens' access to e-government services like Central Provident Fund accounts, will be expanded to include the private sector.

This means traders could access their accounts with stock-broking or insurance companies using the SingPass Mobile app, which authenticates users by scanning their faces or fingerprints without needing any password.

The secure digital signing of confidential business and legal documents is also on the cards.

Mr Cedric Foo (Pioneer), who is chairman of the Government Parliamentary Committee for Communications and Information, had asked how Singapore's Smart Nation efforts will keep the country relevant and competitive.

Zooming in on artificial intelligence (AI), Dr Balakrishnan said a new inter-agency task force will be set up this year to develop AI as a strategic capability, and work towards Singapore becoming a global hub for test-bedding, deploying and scaling AI solutions.

The Government will also take steps to build know-how in AI to enable workers to use AI tools.

"This means teaching computational thinking and data literacy in schools, and training adults in data science and AI skills," he said.

Dr Balakrishnan assured them that with the information gleaned from Singapore's digital infrastructure and the efforts in AI, services will improve.

"In the coming years, with the data generated from our expanding digital infrastructure, we can expect services to become more personalised, more tailor-made to the individual needs of citizens, and to be more responsive," he said.