SINGAPORE - Divorcees will no longer be made to wait three years before they can apply for a subsidised flat, National Development Minister Lawrence Wong announced in Parliament on Tuesday (March 6).

Currently, only divorcees who get full custody of all children can purchase a second subsidised flat after disposing of the matrimonial home. But those who do not get full custody, or have no children, are subject to a three-year debarment period.

"We have reviewed the matter, and have decided to remove the time bar completely," Mr Wong said during the debate on his ministry's budget. "We hope that this will help divorced persons provide a more conducive living environment for their children and go some way to help families through an already difficult period of transition."

The time bar was put in place in 1997 to allow a divorced couple only one subsidised flat between them, to prevent couples from "gaming the system" and owning multiple flats, previous media reports said. Both sides had to agree on who would be allowed to buy the subsidised flat, in what was called the "mutual consent requirement".

This time limit was set at five years initially, and then reduced to three years in 2013. 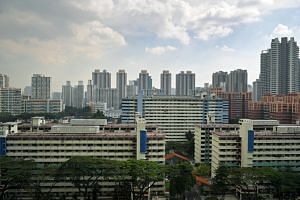