SINGAPORE - MP Louis Ng (Nee Soon GRC) is an animal rights advocate who has opposed the culling of animals but there is one sacred cow he wants slayed - streaming in secondary schools.

Mr Ng on Wednesday (Feb 27) called for the system to be eliminated in favour of subject-based banding, to ensure social mixing and prevent the stigmatisation faced by students in Normal streams.

He said in Parliament that the Education Ministry replaced primary school streaming with subject-based banding in 2008 and secondary schools should apply the same system.

Subject-based banding was rolled out in secondary schools last year (2018) and allows students from the Normal streams to take subjects at a higher academic level, but streaming is still used to separate them according to academic ability based on their PSLE score.

Mr Ng said on the second day of the Budget debate that while streaming caters to the different learning needs and pace of students, the problem is that it is based on academic results.

And the reality is that students in the Normal streams tend to have a lower socio-economic status than those from the Express stream, he added.

Mr Ng pointed out that from 2014 to 2018, 69 per cent of secondary school students who received assistance from the Education Ministry's Financial Assistance Scheme were from the Normal stream.

The percentage of students living in public rental flats is also higher in the Normal streams than in the Express stream, he highlighted.

"We all know that we hang out with our classmates much more than with our schoolmates. What streaming has possibly done is to reduce social mixing and harden social stratification," Mr Ng said.

He added: "I am sure streaming was not meant to divide our nation by social economic status, but we now see streaming does contribute to it."

Mr Ng also raised the issue of a lack of mobility between streams.

He noted that each year, 530 Normal (Technical) students transfer to the Normal (Academic) stream. And of these students, 10 to 20 eventually move on to the Express stream. 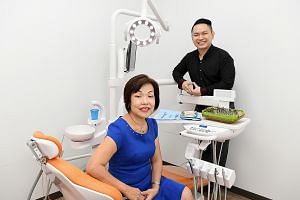 Has streaming run its course?

"Here's what it means: If you are a student from the Normal (Technical) stream, you have less than 1 per cent chance of moving to the Express stream," Mr Ng told the House.

He said the stratification continues further up the education ladder.

He said that psychological barriers could be one reason why students in the Normal streams struggle to move to the Express stream. Academic streaming pigeon-holes students, placing expectations about their intelligence or abilities according to the stream they are in, Mr Ng said, quoting Ang Mo Kio GRC MP Intan Azura Mokhtar.

He said there are students from the Normal (Technical) stream who have done well but they are in the minority.

He related to the House the story of Mr David Hoe, an economics teacher at a junior college. Mr Hoe scored 110 for his PSLE and went into the Normal (Technical) stream.

Despite growing up in challenging family circumstances and falling into bad company, Mr Hoe met the right friends who helped coach him in his studies, Mr Ng said.

Mr Hoe was one of the top scorers in the N-Levels, but was still not allowed to do the O-Levels. He wrote to then-Education Minister Tharman Shanmugaratnam, who intervened on his behalf so he could eventually take the O-Levels, Mr Ng said.

Calling for streaming in secondary schools to be scrapped, Mr Ng said: "There will be inequality in our education system. The fact is that not everybody is the same. But our students are not stupid and should not feel that they are or face that kind of stigma.

"I know that streaming is a sacred cow and this practice has existed for many decades. Members will know that I don't like to cull animals but, Sir, it really is time to slay this sacred cow," Mr Ng said.