SINGAPORE - Starting Jan 1, 2019, smokers need to be at least 19 years old before they are allowed to buy cigarettes, under a new law passed by Parliament on Tuesday (Nov 7).

This new legal age - which is one year older than the current 18 - will subsequently be raised one year at a time until it is set at 21 in 2021, as part of the nation's effort to reduce the number of smokers.

To boost this effort, the law will also ban people from buying, using and owning imitation tobacco products, such as e-cigarettes, e-cigars and e-pipes.

It broadens existing laws that ban the sale, importation and distribution of these battery-powered devices that heat nicotine-infused liquids to produce a vapour meant to be inhaled.

Parliamentary Secretary for Home Affairs and Health Amrin Amin said the aim is to "de-normalise" the use of tobacco products over time.

Speaking during the second reading of the Tobacco (Control of Advertisements and Sale) (Amendment) Bill, he said data from the Health Promotion Board showed that the proportion of smokers here has hovered between 12 per cent and 14 per cent in the past 10 years.

While these numbers are at least 6 per cent lower than those of the 1990s, more can be done to reduce the prevalence of smoking, said Mr Amrin. 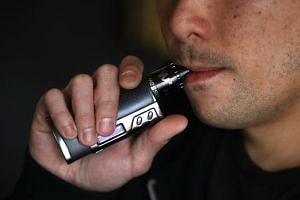 Buying, using and possessing imitation tobacco products like e-cigarettes will be illegal from Feb 1: MOH

He noted that it is more common for men to smoke in Singapore, compared with Australia or the United States. Currently, 23 per cent of local men smoke, while the figure is 14.5 per cent in Australia and 15.6 per cent in the US.

Raising the age limit for smokers targets those who take their first puff before they turn 21 - a category that 95 per cent of smokers fall under, Mr Amrin said.

Currently, 45 per cent of smokers started their smoking habit between the ages of 18 and 21.

Two in three people under the age of 18 get tobacco from their friends and schoolmates.

Mr Amrin cited research in the US that showed how adolescent brains are particularly vulnerable to nicotine addiction, adding that "smokers who start earlier also find it harder to quit smoking later in life".

The Ministry of Health (MOH) considers imitative tobacco products as gateway products that get users hooked on nicotine, leading to cigarette use.

"So-called lesser-harm tobacco products still expose the user to toxic substances," said Mr Amrin, dismissing claims that these products are less harmful than cigarettes. "Some of these (claims) actually come from research sponsored by the tobacco industry."

He said the ministry had received feedback that imitative tobacco products help smokers quit, but it is "not persuaded".

Evidence suggesting that e-cigarettes can help smokers quit is "neither robust nor conclusive", he added.

He cited statistics from Britain to show that the number of e-cigarette smokers there increased four times to 2.8 million between 2012 and 2016.

Before tabling the Bill last month, Mr Amrin added, MOH had also looked at a systematic review of nine studies involving more than 17,000 young people in the US, which found that e-cigarette users were three times more likely to smoke cigarettes compared with non-users.

Manufacturers can submit their products "for evaluation as a smoking cessation therapy", and show contrary, solid evidence of that, he said. But none has done so so far, he added.

Once imitative tobacco products have undergone the same tough checks as the replacement therapies in the market, they can be registered as therapeutic products, which are exempted from the changes.

To ensure that the changes stick, said Mr Amrin, MOH will work with customs and other agencies to fight illicit trade.

Mr Amrin added: "There is mounting pressure, especially from self-interested parties, to relax our position... Our interest is in protecting our people."