SINGAPORE - The introduction of new technologies by the Singapore Armed Forces to tackle the manpower crunch and stretch the defence dollar, as well as a new One-BMT (Basic Military Training) programme were among the new measures announced in Parliament on Friday (March 2).

Here is a look at some of these new technologies and programmes:

- Can be manned both remotely and on-site

- The first one is expected to be operational by March at Jurong Island, with two more deployed by September

- This vessel has a modular design, meaning it can be fitted with different systems, or payloads, such as with a towed synthetic aperture sonar for sea mine detection

- Could also be configured to perform coastal patrols and neutralise mines

- Coastal patrols, now performed by 30-man patrol vessels or 23-man littoral mission vessels (LMVs), might in the future be done by just two

- Approximately 16m long, can travel at more than 46 km/h and more than 36 hours at a stretch

- Self-organised drones will be used to reduce the manpower and time taken for the assessment of runway damages, such as potholes and cracks, or debris 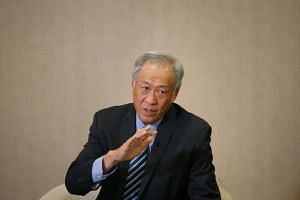 - By applying data analytics to aircraft information, a smart-fleet management system will be able to proactively recommend maintenance actions, such that these can be carried out before more serious problems surface

- Aircraft hangars will be equipped with sensors and unmanned ground vehicles to perform checks to ensure that the aircraft are fit for flight, reducing inspection load for the air force engineers and aircraft turnaround time

- Previously under the previous mono-intake system, some combat-fit NSFs did their basic military training at the camps of the respective units, such as at Selarang Camp in Loyang for the 3rd Battalion, Singapore Infantry Regiment (3 SIR)