SINGAPORE - People's Action Party candidates must have the non-negotiable quality of being able to take care of residents' needs, said the party's organising secretary Ng Eng Hen on Sunday.

"Our priority is to make sure that the candidates we put up, they have a quality that cannot be negotiable: if you cannot take care of your residents needs, even if you're minister potential, we're not going to field you. It's simple as that," said Dr Ng.

The Bishan-Toa Payoh GRC MP added: "Our first priority is and should be: can this person we're putting up for election care for residents' needs? Bond the community, identify and empathise with them?"

He was speaking to reporters after the launch of a senior care centre at Toa Payoh. The centre is a day care facility for seniors which organises social activities and exercises and provides active rehabilitation and community nursing services. Run by NTUC Health Silver Circle, it is one of 10 such centres in Singapore. 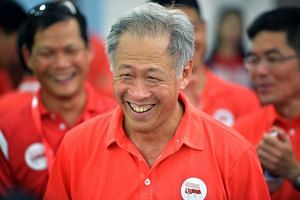 When asked about the likelihood that the general election will be in September, Dr Ng replied: "You know, I told people that if all the students think this exam question has to come out, the examiner may change the exam question."

He also said that the PAP is waiting until after the National Day weekend to introduce its new candidates, as he previously announced, because "we don't want to even further increase the temperature and tempo".

"We're hoping that from this week leading to the national day weekend, we'll try not to further increase the temperature than it already is. It may be difficult but we'll try," he said.

He added: "I think probably Singaporeans would like that too, to be able to enjoy their Jubilee weekend and National Day Parade without political contestation."